A family in Connecticut had an unusual guest on Saturday after a man crashed his SUV into their yard and then walked around their house naked.

The Newtown Police Department told FOX61 they were dispatched to the home after residents said a naked man they did not know was wandering around their home.

The residents were out shopping in the morning and returned home to find 35-year-old Joseph Achenbach of Watertown inside.

During the investigation, officers determined that Achenbach had crashed his Ford Escape into the backyard of the residents' home and wandered into the house through an unlocked sliding glass door. 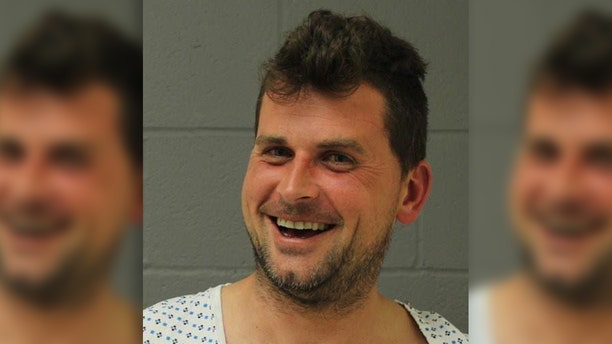 Joseph Achenbach was arrested after police said he crashed his SUV into a family's yard and then wandered in their home. (Newtown Police Department)

Police said that the 35-year-old's clothes could not be found at the scene, and it is believed that he was naked when he crashed the car, FOX61 reported.

Police believe that alcohol and drugs played a role in the suspect's behavior.

Achenbach has been charged with criminal trespassing, reckless endangerment, disorderly conduct and driving while intoxicated. He's being held on $5,000 bond and will appear in court Monday.