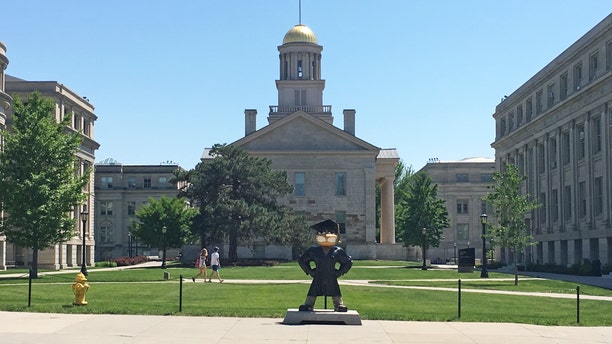 School mascot Herky the Hawk in front of the Old Capitol Museum at the University of Iowa. (REUTERS/Koh Gui Qing)

A conservative Christian student group’s lawsuit against the University of Iowa is pitting the right to religious beliefs and the institution’s policies barring discrimination based on sexual orientation.

The 10-member group called the Business Leaders in Christ (BLinC) waged a legal challenge last December after the university suspended their activities on campus over the denial of a leadership position to a gay student.

The Christian group said anyone can become a member, but the leaders must affirm a statement of faith that rebukes homosexuality, which is within their rights according to laws guaranteeing freedom of religion.

In the lawsuit, the group says it "cannot and will not ask leaders who do not share its beliefs to lead members in prayer or to convey those beliefs."

The university prohibits any discrimination based on sexual orientation and accused the BLinC of violating the school's Human Rights Policy and the Iowa Civil Rights Act, Fox News reported last year.

The group, founded in 2015, was meeting weekly for Bible study and focused on service projects and to teach students “how to continually keep Christ first in the fast-paced business world."

Since the loss of license to operate, the group is no longer able to reserve campus meeting space, attend student recruitment fairs or access funds from student activity fees.

The controversy between the Christian students and the university dates back to last February when Marcus Miller, a now-former student-member of the group, filed a complaint to the faculty after being rejected to serve as the group’s vice president – because he was gay.

The group said the request was denied because Miller rejected the Christian beliefs and would not follow them, adding that all leaders in the group must affirm a statement of faith stating that they “embrace, not reject, their God-given sex" and agree that marriage can be only between a man and a woman.

"Every other sexual relationship beyond this is outside of God's design and is not in keeping with God's original plan for humanity," the statement of faith says.

"Every organization to exist has to be able to select leaders who embrace its mission," the group's attorney, Eric Baxter with the nonprofit law firm Becket Fund for Religious Liberty, said. "You would never ask an environmental group to have a climate denier as their leader. It's the same thing here."