Navy got off to a slow start on Saturday but quickly bounced back to handily defeat Army with a final score of 31-7, winning the coveted Commander-in-Chief Trophy, as President Trump looked on from the stands.

Trump received a warm reception from the crowd when he arrived to take his seat at Lincoln Financial Field in Philadelphia, as the stadium showered him with roars and applause.

This was Trump's third appearance at the historic rivalry game, and the 120th meeting between the teams from the Military Academy at West Point, in New York, and the U.S. Naval Academy in Annapolis, Md.

The president also visited both teams in their respective locker rooms to wish them luck before the game, and informed them that students will be allowed to pursue a career in professional sports before they are required to fulfill their military service obligations. Trump had directed the Defense Department to change its rules for players seeking to play professionally and allow for a service waiver.

He also shook each player's hand and thanked them for their service.

Trump, sporting a signature "Make America Great Again" hat, also participated in the coin toss before the start of the game. He spent the first half of the game on the Army sideline before walking over to Navy's sideline for the second half. 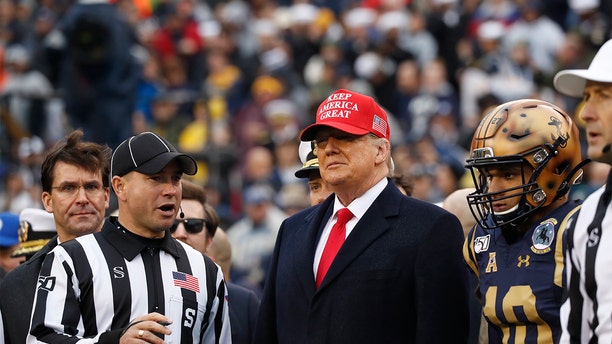 The 23rd-ranked Midshipmen notched their 10th win of the season, with two losses, while the Army Black Knights fell to 5-8 on the year.