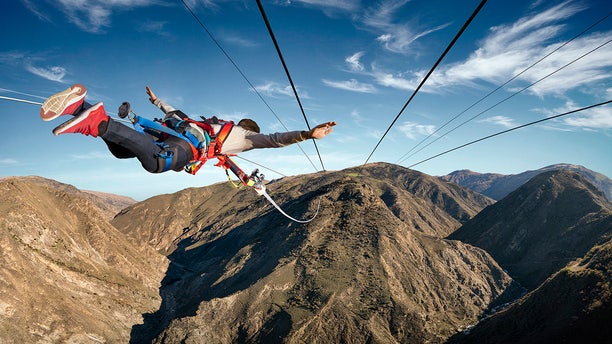 The Nevis Catapult is billed as "the biggest and most extreme catapult in the world." (AJ Hackett Bungy)

A new thrill ride in New Zealand last week promises to deliver a "gut-wrenching" experience for anyone brave enough to attempt it, and early footage from the first few riders certainly confirms the "gut-wrenching" aspect.

The Nevis Catapult, which is the newest thrill ride from AJ Hackett Bungy New Zealand, launches riders nearly 500 feet through a canyon in Nevis Valley, near Queenstown, at speeds in excess of 60 miles per hour — all while they swoop across the sky.

"The experience is exhilarating," AJ Hackett co-founder Henry van Asch told Escape.com.au of the ride, further describing it as "gut-wrenching."

"Up to 3 Gs of force and acceleration of around 100 kilometers in 1.5 seconds is not your typical experience — and I think people are going to get a pretty big kick out of it,” he added.

Van Asch says AJ Hackett has been thinking about adding such a ride for a long time,, saying, "after seeing a guy skydiving out of a plane with his bike, we wanted to try our bungy version of that."

A few years and millions of dollars later, the Nevis Catapult opened alongside the Nevis Bungy, which is exactly what it sounds like, and the Nevis Swing — a similarly terrifying ride that swings riders through the Nevis Valley through a 300-meter arc.

Early reviewers describe the ride as "epic" and "one of the scariest" experiences, although footage seems to suggest those might be understatements.

“For me, the most exciting part of it is how surprising it is," said van Asch. "The speed, the height and then the sudden drop. You don’t know exactly when you’re going to go either, and that adds to the fun.”