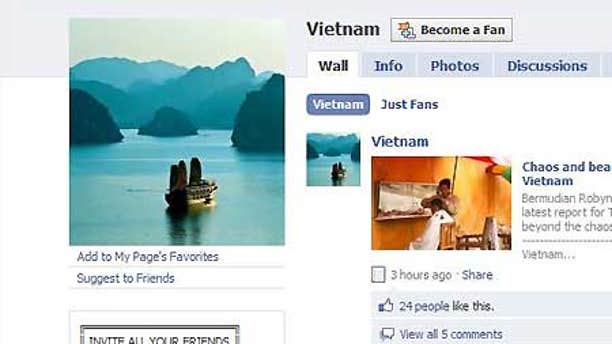 HANOI, Vietnam — Vietnam's growing legions of Facebook users fear that the country's communist government might be blocking the popular social networking Web site, which has become difficult to access over the past few weeks.

Facebook has more than 1 million users in Vietnam, and the number has been growing quickly since the company recently added a Vietnamese language version of the site.

Over the last week, access to Facebook has been intermittent in the country, whose government tightly controls the flow of information. The severity of the problem appears to depend on which Internet service provider a customer uses.

Access to other popular Web sites appears to be uninterrupted in Vietnam, a nation of 86 million with 22 million Internet users.

Government officials and managers at several of Vietnam's state-controlled Internet service providers did not respond to a request for comment.

But technicians at two of Vietnam's largest Internet service providers said they had been swamped with calls from customers complaining they could not access Facebook during the last week.

A technician at Vietnam Data Corp. said government officials had ordered his firm to block access to Facebook and that VDC instituted a block on the site Nov. 11. He declined to give his name because he was not authorized to speak to the media.

However, Vu Hoang Lien, the firm's top executive, said he was unaware of any such order.

"I don't know anything about that," he said.

Word of the access problems has not yet filtered back to Facebook's headquarters in Palo Alto, California, said Debbie Frost, a company spokeswoman.

"We would be very disappointed if users in any country were to have difficulties accessing Facebook," she said.

Most Facebook users in Vietnam utilize the site to communicate with friends and family, and to expand their social network, sharing photos, Internet links and blogs.

It appears that Vietnam might be following in the footsteps of China, its massive northern neighbor, with whom it shares a similar economic and political system. China has blocked Facebook since July and has also shut down Twitter and YouTube.

One Western diplomat said he was aware of the Facebook access problems but did not know what had caused them.

The diplomat, who declined to be identified, citing embassy protocol, said Vietnam's government might be concerned about Facebook blogs and that the site facilitates communication between Vietnamese citizens and overseas Vietnamese who fled after the war, whom the government often views with suspicion.

An unauthenticated document circulating on the Internet — which says it was issued by Vietnam's Ministry of Public Security — has fueled fears of a shutdown. The document, dated Aug. 27, instructs Internet service providers to block Facebook and a handful of other lesser-known Web sites.

The document does not appear to bear the official security ministry seal, however, and was issued weeks before Facebook users began reporting problems.

Vietnamese Facebook users have been chatting about their access problems online, and some who have managed to get onto the site have voiced their frustrations.

"Why do you block Facebook, Vietnam? Why? What's next?" wrote a despondent Vietnamese Facebook user who managed to get onto the site.

Users also vented their frustrations in a Yahoo chat room.

"I spent all afternoon trying to log on to Facebook but couldn't get in," one user wrote. "What's going on?"

Some tech-savvy Facebook fans have found ways around access problems by readjusting their Web browsers to a different configuration. They have been sharing instructions for doing so online.

The Facebook problems have also frustrated tourists and expatriates living in Vietnam.

An expatriate living in the capital, Hanoi, who was unable to access the site said it was a huge inconvenience as it meant he could not use Facebook to keep in touch with his extended family back home.

He declined to give his name for fear of government reprisal.