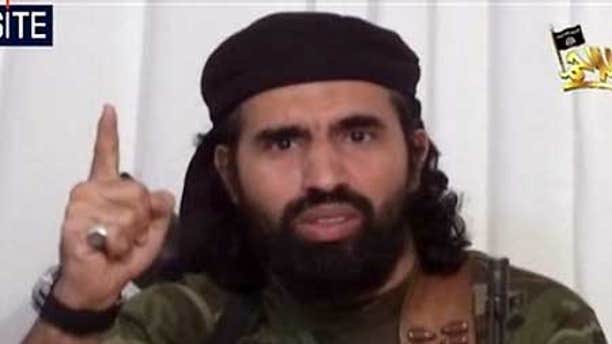 Muhammad al-Awfi, a one-time Guantanamo Bay detainee, was captured by Yemeni authorities and transferred to Saudi Arabia Tuesday after returning to battle in Yemen. (Reuters)

A Saudi formerly detained at Guantanamo Bay who became an Al Qaeda field commander in Yemen after his release from a Saudi "rehabilitation" program was brought back into custody Tuesday — but experts say he may still pose a considerable threat.

Abu al-Hareth Muhammad al-Awfi lived quietly in Saudi Arabia for a year after his release from Guantanamo Bay in November 2007, but he re-emerged last month in a jihadist video that showed him in Yemen, wearing a bandolier of bullets and threatening the United States.

Hailed by militants as a "fomenter of war," he was named by Saudi Arabia as one of the 85 most-wanted men who had fled the country. Under pressure in Yemen, he turned himself in and was brought back to his native country, where he has been placed once again in a rehabilitation program meant to wean jihadists away from radicalism.

But al-Awfi returned to battle soon after his release from the program in 2008, and experts are worried that deeply committed terrorists like al-Awfi can never be fully rehabilitated.

The Saudi rehabilitation program entices prisoners with gifts and good treatment and releases them to their families' custody when they sign pledges to abandon terror.

But the inmates' radical commitment cannot be overcome with kindness, said David Draper, director of Strategic Operations at the terror watchdog NEFA Foundation.

"They get them to promise that they'll go into mainstream society and they'll work in their jobs and their homes, and they promise they won't go back into jihad — and then of course they do," Draper told FOXNews.com.

Sheik Mohammed al-Nujaimi, who helps run the rehab program, said al-Awfi had contacted the program's headquarters and "expressed a desire to surrender and return to Saudi Arabia." Saudi government officials confirmed that he would return to the rehabilitation center.

But the rehab program, which failed to deradicalize him once, may fail again.

"One of the main problems with programs like this is that it can certainly be part of the solution but it can never be the whole solution," said Gregory Johnsen, an expert on the Islamic insurgency in Yemen. "The individuals who've made this a life choice . . . you're not going to be able to convince them."

Al-Awfi railed against the Saudi program in the jihadist video released by Al Qaeda, saying it aims "to drive us away from our Islam."

Johnsen said al-Awfi may have been forced to leave Yemen when he lost tribal support there and had to reach out to the government for protection before he became an easy and vulnerable target.

Safely in the hands of Saudi authorities, it remains unclear how long al-Awfi will be held in rehab the second time around.

"I don't think they're going to be as accommodating as they were before with people that have gone through this rehabilitation program and then get rearrested," said Draper. "I would hope not."

But Draper said that even if he is in custody indefinitely al-Awfi could pose a "secondary threat."

"The people that follow these guys are extremely loyal," Draper told FOXNews.com. "If some of his followers plan and execute retaliatory attacks, then yes, he's a threat."

At one time, al-Awfi was Detainee No. 333 at the U.S. Naval prison at Guantanamo Bay. He was released on Nov. 11, 2007 after he told U.S. officials that he had been wrongly arrested in Pakistan, where he said he was trying to help refugees.

His jihadist video was released online the day after President Obama signed an executive order directing the closure of the Guantanamo Bay prison within a year.

Draper said no government has devised a proper answer for dealing with the detainees, who are neither conventional criminals nor prisoners of war.

"I think that [the Obama administration] is starting to realize that this is more of a frustrating situation than they first thought it was," Draper said.