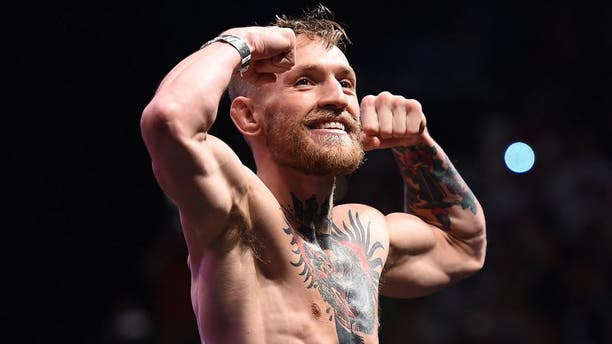 UFC featherweight champion Conor McGregor hit the scale for the first time as a welterweight during Friday's UFC 196 weigh-in from Las Vegas.

McGregor will be making his welterweight debut against fan favorite Nate Diaz, who is coming off an impressive decision against Michael Johnson in his last outing. McGregor, fresh off a 13-second knockout of Jose Aldo, was originally scheduled to face lightweight champ Rafael dos Anjos before an injury forced the UFC to scrap those plans.

Now, McGregor and Diaz will face off after a week of heated exchanges and near brawls.

In the co-main event, women's bantamweight champion Holly Holm makes her first title defense against two-time title challenger and former Strikeforce champion Miesha Tate. Holm, of course, shocked the world when she KO'd former champ Ronda Rousey and looks to do the same against Tate, who has won her last four fights in convincing fashion.

Also on the card are light heavyweights Gian Villlante, Ilir Latifi, Corey Anderson and Tom Lawlor, as well as a women's bantamweight fight between fourth-ranked Amanda Nunes and Valentina Shevchenko.

Re-watch all the action in the video above and stick with us throughout the weekend for all your UFC 196 coverage.