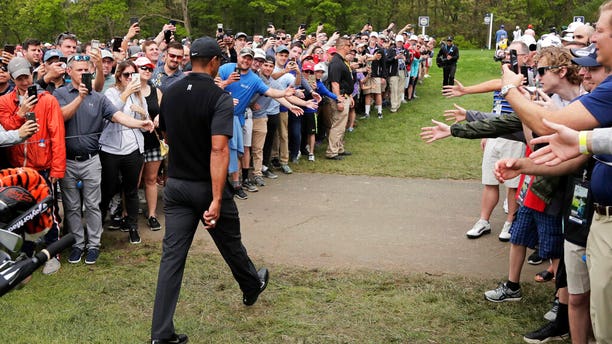 Tiger Woods walks to the eighth tee during the second round of the PGA Championship golf tournament, Friday, May 17, 2019, at Bethpage Black in Farmingdale, N.Y. (AP Photo/Julio Cortez)

Despite his thrilling Masters victory last month, Tiger Woods finished his second round at this week's PGA Championship on the wrong side of the cut line.

At 5 over par at Bethpage Black on Long Island, it became clear this wasn't going to be a Masters repeat. The cut was projected to be 4 over, The Associated Press reported, though there was a chance it could move up to 3 over.

By the way, Brooks Koepka finished up the round with a huge lead at the PGA Championship and another entry in the major championship record book.

Koepka birdied three of his last four holes for a 5-under 65 to shatter the 36-hole record in all four majors. He was at 12-under 128.AP said that broke the mark of 130 set at the Masters by Jordan Spieth, the U.S. Open by Martin Kaymer, the British Open by Nick Faldo and Brandt Snedeker, and the PGA Championship by Gary Woodland.

Woods won the Masters at Augusta National Golf Club on April 14, his first major championship win in over 10 years.

Woods, AP reporter, said he'a enjoyed being the Masters champion. He was even awarded the Presidential Medal of Freedom on May 6 by President Trump after his Masters win

But at 43, he said, he needed the rest more than the practice with the quick turnaround to the PGA.

He will try again for his 16th major victory at the U.S. Open in June at Pebble Beach.

Over the course of his career, Woods, 43, has won 81 PGA tournament titles, including 15 majors, cumulatively earning $118 million in prizes over 24 years as a pro golfer.

The PGA final round is on Sunday.