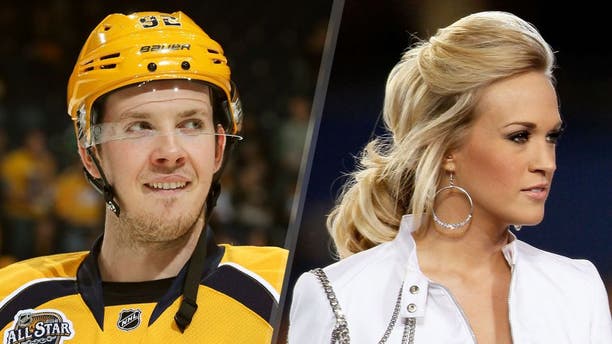 NASHVILLE, TN - JANUARY 16: Ryan Johansen #92 of the Nashville Predators skates in warm-ups prior to the game against the Minnesota Wild during an NHL game at Bridgestone Arena on January 16, 2016 in Nashville, Tennessee. (Photo by John Russell/NHLI via Getty Images) MIAMI GARDENS, FL - FEBRUARY 07: Singer Carrie Underwood performs during the pregame show prior to Super Bowl XLIV between the Indianapolis Colts and the New Orleans Saints on February 7, 2010 at Sun Life Stadium in Miami Gardens, Florida. (Photo by Donald Miralle/Getty Images)

Underwood, who is married to Predators veteran Mike Fisher, gave Johansen the business after the 23-year-old player was seen kissing his hockey stick during Friday's game against the Tampa Bay Lightning. The seven-time Grammy Award winner wasn't about to let that public display of affection go by the boards as Underwood took to Twitter and set Johansen's kiss to four separate three-second music clips.

The former American Idol was direct in pairing Color Me Badd's ditty of "I Wanna Sex You Up" with Johansen's display before taking a classier route with Sixpence None The Richer's "Kiss Me." Whitney Houston's "I'm Your Baby Tonight" followed before Underwood finished her trolling with Prince's "Kiss" - complete with emojis in tow.

Johansen fired back on social media with what best could be described as a comedic kiss off. How did he do that? Well, the new Predator puckered up with Fisher in front of a poster of Underwood.