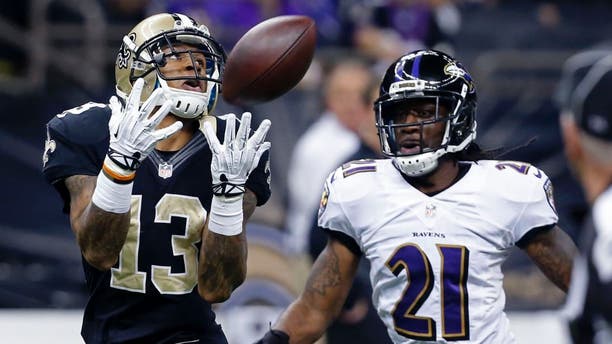 The Baltimore Ravens added a healthy body to their depleted group of receivers in former Saint Joe Morgan.

Morgan was signed after a Tuesday tryout that reportedly also included Hakeem Nicks and Chuck Jacobs. Jacobs was added to the team's practice squad. While Nicks has the most impressive credentials of the trio, injuries have taken a toll on his career. The 27-year-old has now gone unsigned after five tryouts this offseason. He recorded a career-low 38 catches for 405 yards with the Colts last season after five years with the New York Giants.

Morgan, who was released by the Saints on Oct. 6 without any appearance this season, has just 14 career receptions in 19 games over five seasons in New Orleans, two of which were spent on injured reserve. He has flashed some playmaking ability in his limited opportunities, including a pair of 60-yard plays against Baltimore last season.

Jacobs, originally signed by San Francisco as an undrafted free agent out of Utah State in 2014, has yet to appear in a regular season game.

Steve Smith Sr., who suffered a season-ending Achilles tear on Sunday, was placed on injured reserve to clear a roster spot for Morgan. He joins fellow receivers Michael Campanaro and Darren Waller on the injured list. First-round pick Breshad Perriman has still yet to play this season after suffering a knee injury on the first day of training camp.

Tight end Konrad Reuland was released from the practice squad to make room for Jacobs.