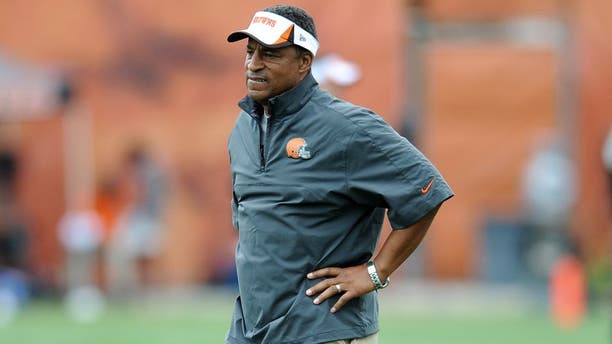 New Cleveland Browns head coach Hue Jackson is lining up candidates to fill out his defensive coaching staff this week.

Jackson will meet with Titans defensive coordinator Ray Horton, who served in the same position for the Browns in 2013 under Rob Chudzinski. Since Horton is still under contract in Tennessee, the Browns needed permission to speak to Horton, which they requested and received, according to NFL Network's Ian Rapoport.

Speculation regarding Horton's status swirled over the weekend, indicating he was unhappy about the interview process for the Titans' head coaching job, which went to Mike Mularkey just hours after Horton's sitdown with the club. Horton denied the reports, and even said he was in discussions with the organization about a contract extension.

Jackson is also reportedly meeting with former Cowboys defensive coordinator Brian Stewart for an undisclosed position on his staff, according to Scott Petrak of the Chronicle-Telegram. Stewart served under Wade Phillips for two season in 2007 and 2008 and spent this past season as the defensive backs coach at the University of Nebraska.

Mary Kay Cabot of Cleveland.com also reported Monday that Jackson would meet with Vikings running backs coach Kirby Wilson to become the Browns' running game coordinator. The Browns were originally denied permission by Minnesota to meet with Wilson, but his contract officially expires on Tuesday. With Jackson announcing last week that he won't be hiring on offensive coordinator, Wilson's potential role on the offensive staff could be a prominent one.