Here's why Matt Kenseth might be the dad of the year 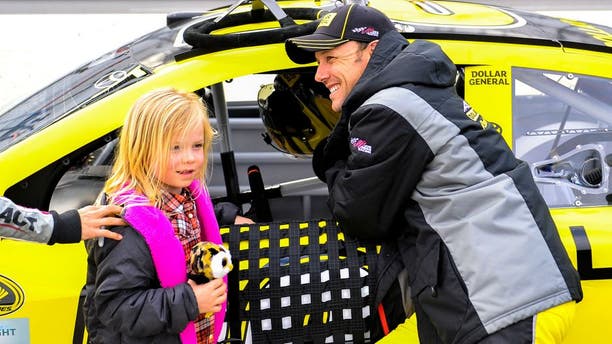 MARTINSVILLE, VA - MARCH 27: Matt Kenseth, driver of the #20 Dollar General Toyota, stands on the grid with his daughter, Grace, prior to qualifying the NASCAR Sprint Cup Series STP 500 at Martinsville Speedway on March 27, 2015 in Martinsville, Virginia. (Photo by Alex Goodlett/Getty Images)

In addition to being an elite NASCAR driver, Matt Kenseth might also be the dad of the year.

Kenseth, the father of three little girls and a grown son, Ross, arranged for Charlotte Motor Speedway to serve up a special surprise for middle daughter Grace on Thursday.

In honor of Grace's fifth birthday, the speedway's graphics department created this special note on its 200-foot wide, 80-foot tall, 165,000-pound video board.

Matt later showed his sense of humor in sharing a photo on Twitter of his daughter's birthday message.