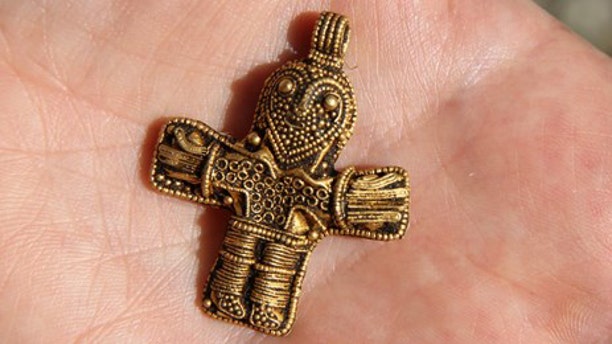 Denmark's Dennis Fabricius Holm got off work early on March 11 and decided to go for a stroll with his metal detector near the town of Aunslev.

"Suddenly I hit upon something," he tells national broadcaster DR, per the Local. "Ever since I turned over the clump of earth and saw the cross, I've been unable to think of anything else." Holm had indeed made "an absolutely sensational discovery," says archaeologist Malene Beck of the Ostfyns Museum.

The 1.5-inch-tall pendant, complete with gold threads and filigree pellets, features the image of an open-armed man and is almost identical to a silver crucifix found in Sweden, visible here.

A release speculates it was worn by a Viking woman. The Independent calls it "one of the most well preserved Christian artifacts found in Denmark," but its date, AD900 to AD950, is what most intrigues experts.

Christian missionaries were known to be in Denmark in the eighth century, but the oldest known depiction of Jesus on a cross in Denmark—on what is known as the Jelling Stones—didn't appear until AD965.

It was believed to signify the start of the conversion of the Danes, most of whom were Christian by 1050. But since the pendant predates the Jelling Stones by at least 15 years, it "can therefore help to advance the time when one considers that the Danes really were Christians," Beck says.

"The person who wore it would undoubtedly have adhered to the Christian faith." She adds the find is so significant that the history books will need to be rewritten.

"I have not yet grasped that find's influence on Denmark's history," Holm tells TV2. "It is hard to comprehend." (Last year, a man with a metal detector uncovered Nazi-era treasure.)

This article originally appeared on Newser: This Tiny Viking Pendant Could Rewrite History