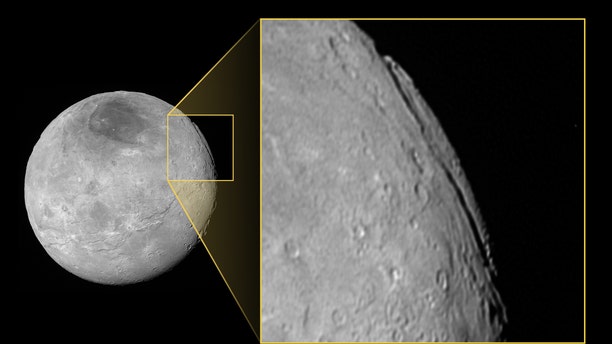 The section of the "super grand canyon" in this image is approximately 185 miles long. (NASA/JHUAPL/SwRI)

Arizona is no match for Pluto’s largest moon. On the dwarf planet’s moon Charon, mammoth cliff faces lurk on a satellite that’s just 753 miles in diameter.

NASA recently announced that its New Horizons spacecraft spied a canyon that’s both longer and deeper than the Grand Canyon in the American southwest-- a distant geological marvel the space agency is referring to as a “super grand canyon.”

They’re calling the canyon Argo Chasma, and say that it could be as long as 430 miles and as deep as an astonishing 5.5 miles. The Grand Canyon on Earth is about 280 miles long and has a depth of over a mile.

Not only that, but Charon’s canyon could have cliff faces that are several miles high— plunging vertical faces that could even be taller than the huge cliffs on Miranda, one of Uranus’ moons. That makes them possibly the solar system’s biggest cliffs, the space agency said.

New Horizons made the observations in July of last year when it was 289,000 miles from Charon.