Stargazers have a chance to see bright green comet next week 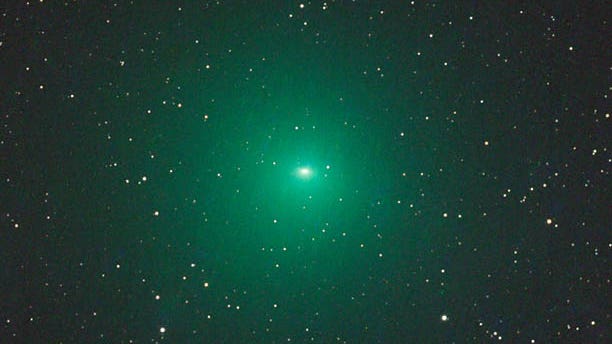 Comet 252P/LINEAR glows a vivid green from fluorescing gas in this composite photo taken from Namibia on March 18, 2016, with a specialized telescope 12 inches in aperture. (Gerald Rhemann / www.astrostudio.at - See more at: http://www.skyandtelescope.com/press-releases/how-to-spot-comet-252p-linear/#sthash.GgGlriwX.dpuf)

When scientists started tracking Comet 252P/LINEAR, they figured it would pass Earth without a trace.

But then something strange happened. The icy object started brightening abruptly a few weeks ago and has become 100 times brighter than expected, according to the astronomy magazine Sky and Telescope. As a result, observers from the Southern Hemisphere have caught a glimpse of the comet that is believed to be about 750 feet in size. They have been able to see it with their naked eye and the comet appeared greenish in color.

Starting Tuesday, stargazers with their binoculars could spot Comet 252P/Linear in the sky – though the view isn’t expected to be as good due the glow of the Moon and natural light pollution.

Related: Two comets set to whiz past Earth this week

You’ll have to be out at least 90 minutes before sunrise and in a location as free of light pollution as possible. Once you have managed that, locate the constellations Sagittarius and Scorpius low in the southern part of the sky. The comet is expected to move between those two constellations.

Another option is locating Saturn and Mars. They and the bright star Antares will be the first things you notice, forming a distinctive triangle a little smaller than your clenched fist held at arm’s length. The comet will be the dot climbing to the left of this trio and will be roughly in line with Mars and Saturn on the morning of March 29th and along a line connecting Saturn and Antares on March 31st. 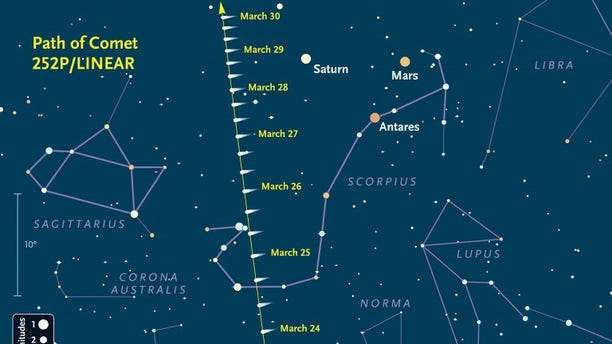 Use this chart to help you find Comet 252P/LINEAR at least 1½ hours before sunrise in late March. The area of sky shown is close to the southern horizon for observers at mid-northern latitudes. Symbols show the comet’s location every 8 hours along its track; those with dates are plotted for 4 a.m. Eastern Daylight Time (8h Universal Time) on that date. The comet will likely appear as a soft round glow with a bright center and now tail. The 10° scale bar at far left is about the width of your clenched fist at arm’s length, and the faintest stars shown are magnitude 5½ (visible from a dark site free of light pollution). (Sky & Telescope diagram)

“Don’t expect Comet LINEAR to be obvious with a long tail,” Sky & Telescope Senior Editor Kelly Beatty said in a statement. “Its light isn’t concentrated in a single point but instead is spread out in a soft round glow, larger than the Moon but many thousands of times dimmer.”

Related: Chaotic comet flyby blew away some of Mars' atmosphere

Astronomers aren’t sure how long it will remain visible, especially since it passed closest to Earth, just 3.3 million miles away, on March 21st. Now, it’s moving away from both Earth and the Sun.

This comet isn’t the only passing Earth this month.

Another comet, PanSTARRS (designated P/2016 BA14), passed even closer to Earth — about 2.2 million miles away — on March 22nd. It also crossing Earth’s skies but astronomers believe it is too fait to be seen unless you have a telescope.

It is also crossing our skies now but is too faint to be seen except with a backyard telescope.

Scientists have described both comets as virtual twins because they have similar orbits.

Related: NASA wants to send your art to an asteroid

Comet P/2016 BA14 was only discovered on Jan. 22 the University of Hawaii's Pan-STARRS telescope on Haleakala, on the island of Maui. Sixteen years ago, Comet 252P/LINEAR was spotted the Massachusetts Institute of Technology's Lincoln Near Earth Asteroid Research survey.

Initially, scientists thought Comet P/2016 BA14 was an asteroid until observations by a University of Maryland and Lowell Observatory team with the Discovery Channel Telescope spotted the tail. But that wasn’t the only surprise offered up by the comet.

It turned out to have a very similar orbit to Comet 252P/LINEAR, which has scientists suggesting they are similar in nature. P/2016 BA14 is roughly half the size of comet 252P/LINEAR, raising the possibility that it might be a fragment that calved off sometime in the larger comet's past.