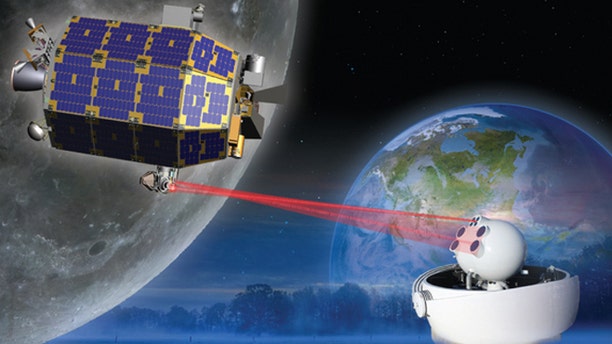 An artist rendering of the LADEE Spacecraft communicating from its orbit around the moon with the Earth. (NASA)

They set their phasers to "chat."

NASA used laser beams to transfer data over the 239,000 miles to and from the moon at a record breaking 622 megabits per second (Mbps), the space agency just announced. NASA's Lunar Laser Communication Demonstration (LLCD) is the first two-way communication system to use a laser instead of radio waves.

"LLCD is the first step on our roadmap toward building the next generation of space communication capability," NASA's deputy associate administrator for space communications and navigation Badri Younes said in a press release. "We are encouraged by the results of the demonstration to this point, and we are confident we are on the right path to introduce this new capability into operational service soon."

Earlier this year, NASA shot the Mona Lisa into space using a laser beam, but reached a rate of only 300 bits per second. The development of laser communications will enable NASA to improve its communication capabilities and lead to increased image resolution and 3-D video transmission from the inky depths of space, according to the agency.

"The goal of LLCD is to validate and build confidence in this technology so that future missions will consider using it," LLCD manager at NASA's Goddard Space Flight Center Don Cornwell said. "This unique ability developed by the Massachusetts Institute of Technology's Lincoln Laboratory has incredible application possibilities."