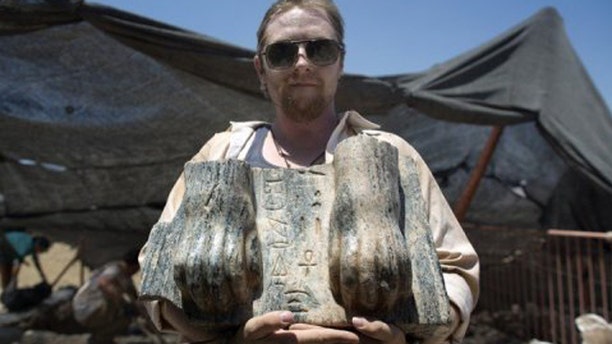 A group of researchers is trying to determine how part of an ancient Egyptian king's unique sphinx ended up buried in Israel.

AFP reports a statue dedicated to Egyptian ruler Mycerinus, who ruled circa 2,500 BC and was builder of one of the three Giza pyramids, was uncovered at an archeological dig in Northern Israel Tuesday.

Archeologists say the statue is a unique find for multiple reasons.

"This is the only monumental Egyptian statue ever found in the Levant - today's Israel, Lebanon, Syria," Amnon Ben-Tor, an archaeology professor at the Hebrew University in charge of the Tel Hazor dig, told AFP. "It is also the only sphinx of this particular king known, not even in Egypt was a sphinx of that particular king found."

The researchers say it is unlikely that the statue was brought into the region during the king's reign, but it is a mystery how it got there.

An expert tells AFP that one option is that the statue was part of the plunders of the Canaanites, who in the late 17th and early 16th century BC ruled lower Egypt.

"Egyptian records tell us that those foreign rulers... plundered and desecrated the local temples and did all kinds of terrible things, and it is possible that some of this looting included a statue like this one," the expert said.

Ben-Tor tells AFP he believes the most likely way the sphinx reached Tel Hazor is in the form of a gift sent by a later Egyptian ruler.

"In such a case it's possible the statue was sent by the Egyptian ruler to king of Hazor, the most important ruler in this region," he said.

AFP contributed to this report