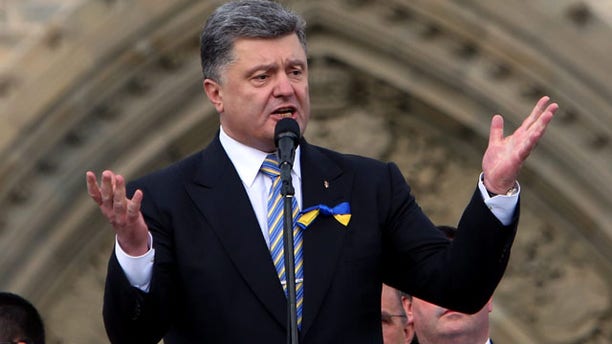 In a symbolic show of support for Ukraine's fledgling government, President Barack Obama is meeting with Ukrainian President Petro Poroshenko in the Oval Office on Thursday after the leader of the former Soviet republic speaks to a rare joint session of Congress.

Poroshenko arrives in Washington seeking more robust U.S military assistance to help his country in its fight against Russian-backed rebels. Obama so far has resisted Ukraine's request for lethal assistance, though the U.S. has provided about $60 million in nonlethal aid to Ukraine's military.

White House officials made clear that Poroshenko's visit -- his first to the U.S. since being elected this summer -- was aimed in part at sending a message to Russia about the West's backing for the embattled former Soviet republic.

"The picture of President Poroshenko sitting in the Oval Office will be worth at least a thousand words -- both in English and Russian," White House spokesman Josh Earnest said.

Ukraine and Kremlin-backed separatists have been locked in a monthslong fight for control of eastern Ukrainian cities that sit on Russia's border, aggression that followed Russia's annexation of the strategically important Crimean Peninsula. The U.S. and Western allies have condemned Russia's provocations, levying a series of economic sanctions and restricting President Vladimir Putin's involvement in some international organizations.

But the penalties have done little to shift Putin's calculus. In recent weeks, the West has accused Russia of moving troops and equipment across its border with Ukraine, though the Kremlin denies such involvement.

Ukraine and the Russian-backed separatists inked a cease-fire agreement Sept. 5, though the deal has been violated repeatedly. On Wednesday, shelling in rebel-held parts of the east killed at least 12 civilians, as a top leader of pro-Russian rebels rejected Ukrainian legislation meant to end the unrest by granting self-rule to large swaths of the east.

Poroshenko, a billionaire businessman, won Ukraine's presidential election in May after his country's Russian-backed leader fled amid popular protests. Western leaders have praised Poroshenko's commitment to reform, and Obama will press him Thursday for more aggressive political and economic actions that can stabilize the fragile nation.

At the heart of the conflict between Ukraine and Russia is the former Soviet republic's desire to strengthen ties with Europe. Poroshenko has only deepened those efforts, making a high-profile appearance at the NATO summit this month and overseeing the backing of a deal this week to strengthen economic and political ties with Europe.

Following a vote by Ukrainian lawmakers, Poroshenko called the deal "a first but very decisive step" toward bringing Ukraine fully into the European Union.