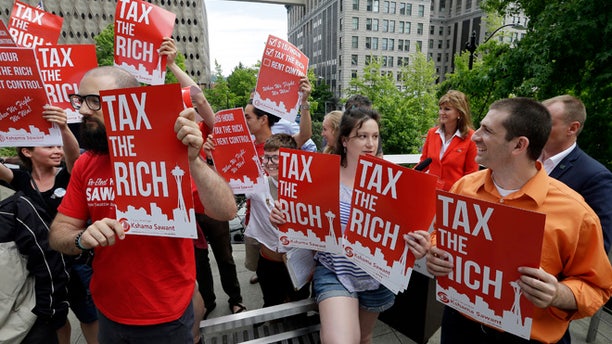 Demonstrators holding signs in favor of a new city income tax on the at a Seattle City Council Monday, July 10. (AP Photo/Elaine Thompson)

Republicans in Washington state are calling for “civil disobedience” as they openly encourage Seattle residents to refuse paying a newly passed income tax that critics claim is illegal.

The tax, passed by the Seattle City Council, targets high-income earners as part of what local lawmakers call “a new formula for fairness.”

But critics and analysts say it was passed in defiance of state law, and the state GOP has escalated its opposition by urging residents to “forcefully resist.”

“This law is unconstitutional, illegal, and against the voter’s will expressed nine times at the ballot box and it deserves nothing less than civil disobedience – that is, refusal to comply, file or pay,” the Washington State Republican Party said in a written statement.

“Our goal is to replace our regressive tax system with a new formula for fairness while ensuring Seattle stands up to President Trump’s austere budget that cuts transportation, affordable housing, healthcare and social services,” outgoing Democratic Mayor Ed Murray said.

The money made would go toward affordable housing projects as well as other services for lower-paid workers.

Opponents of the bill, however, argue that Seattle’s plan to tax the rich is unconstitutional, because the state of Washington imposes strict limits on taxes; prohibits taxes on net income; and requires cities to get permission to tax residents.

Seattle’s tax seems to fail these tests, but local officials like Councilmember Kshama Sawant aren’t backing down and have enthusiastically signaled the city is ready to fight in what could be a very costly legal battle.

“We will no longer tolerate a system that buries poor and working class people in taxes, while giving big business and the super-rich yet another free ride; a system that underfunds affordable housing to the point where thousands are homeless, a system that criminally underfunds education,” Sawant told Fox News in an email Tuesday, adding that the need for the tax is “crystal clear.”

When the bill was signed, Sawant asked supporters,” If we need to pack the courts, will you be there with me?”

But not everyone is on Team Tax.

"No matter who starts out paying it, everyone will eventually suffer."

“The city’s decision to pass a bill that violates state law and supreme court precedents teaches the public that it is acceptable to ignore the law if it is to your advantage,” the Washington Policy Center said in a statement. “The violation is so obvious that city leaders know they are inviting a lawsuit, as citizens seek to defend their rights under state law and the state constitution.”

Dann Smith, president of WPC and a lifelong Seattle resident, said it’s “frustrating to see the Seattle City Council choose to waste taxpayer dollars on lawsuits for an income tax that is not needed.”

The Freedom Foundation said it is prepared to challenge the tax in court. The conservative think tank also argued the tax is a slippery slope and could open the door to more taxes in the future.

“No matter who starts out paying it, everyone will eventually suffer,” CEO Tom McCabe said in a statement.

Washington is one of seven states in the country that does not have a personal income tax.

Analysts at the Washington Policy Center also note the Washington Supreme Court ruled in 1951 to invalidate the income tax. Further, a law passed in 1984 prohibits any city or county from levying a tax on net income.

The state’s voters have rejected the idea of an income tax nine separate times. Washington voters did approve an income tax in 1932, but the state Supreme Court ruled the measure was unconstitutional.