San Francisco's newly elected district attorney has promised not to prosecute public urination and other quality-of-life crimes that have plagued the lucrative Bay Area amid a crippling homelessness crisis affecting urban communities across California.

In response to an American Civil Liberties Union questionnaire reported by The San Francisco Chronicle last month, Chesa Boudin said such crimes should not be prosecuted.

"We will not prosecute cases involving quality-of-life crimes," he said. "Crimes such as public camping, offering or soliciting sex, public urination, blocking a sidewalk, etc., should not and will not be prosecuted. Many of these crimes are still being prosecuted; we have a long way to go to decriminalize poverty and homelessness.” 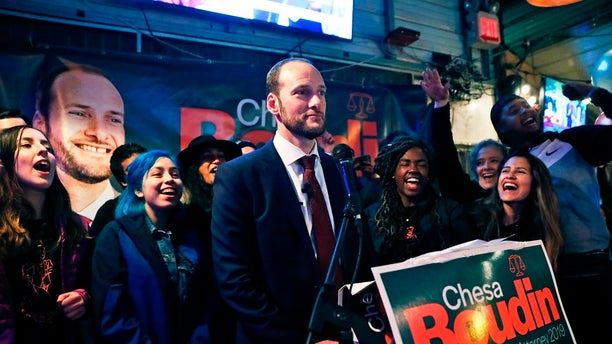 Boudin, a progressive attorney and former public defender, defeated the city's top prosecutor last week after promising sweeping criminal justice reforms. He was one of several progressive candidates elected to district attorney offices across the country in recent years.

Boudin's campaign did not immediately respond to a Fox News request Monday night for confirmation about the quality-of-life pledge.

The son of parents who were members of the radical left-wing Weather Underground, Boudin grew up with his parents incarcerated for their roles in an armed robbery that left three men dead.

“There can be no justice when we utilize prison and jail as the solution to all of our problems,” he said Saturday after Interim DA Suzy Loftus conceded the race. “We must think differently.”

San Francisco has grappled with quality-of-life issues as the area's homeless population has surged. Residents have complained of homeless encampments blocking sidewalks and contributing to crime,  public urination and feces on the street.