House Republicans are hopeful that a four-page memo allegedly containing "jaw-dropping" revelations about U.S. government surveillance abuses will soon be made public.

Rep. Dave Joyce, a Republican from Ohio, told Fox News on Monday that the intelligence committee plans to work on releasing the document but warned that once Americans see it, they’ll “be surprised how bad it is.”

The process of releasing the memo could take up to 19 congressional working days which puts its release around mid-March. The document’s release would first need approval from House Intelligence Committee Chairman Devin Nunes, R-Calif., who can decide to bring the committee back together for a vote. If the majority of the committee votes to release the memo, it would then be up to President Trump.

If he says yes, the memo can be released.

Joyce said he’s personally read the memo twice and “it was deeply disturbing as anyone who’s been in law enforcement and any American will find out once they have the opportunity to review it.” 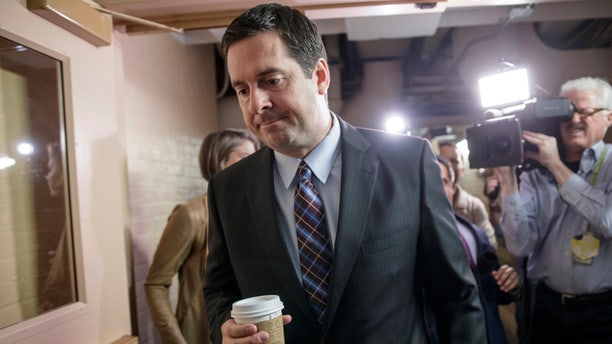 “The FBI has requested to receive a copy of the memo in order to evaluate the information and take appropriate steps if necessary.  To date, the request has been declined,” FBI spokesman Andrew C. Ames told Fox News.

Joyce and a handful of other conservatives have been pushing for the memo to be made public. They have suggested that it contains damning evidence the Obama administration used FISA (Foreign Intelligence Surveillance Act) warrants to spy on the Trump campaign as well as his transition team ahead of the president’s swearing-in.

'It was deeply disturbing.'

A FISA warrant allows U.S. spy agencies to collect information on foreigners outside the country and was reauthorized by Congress earlier this month.

Democratic lawmakers argue the Republican uproar over the memo is a last-ditch attempt by conservatives to discredit the Russia investigation and cast doubt on the people who are running it.

California Democratic Rep. Adam Schiff has called the memo “a profoundly misleading set of talking points drafted by Republican staff attacking the FBI and its handling of the investigation.”

He said it’s riddled with factual inaccuracies and said it gives a “distorted view of the FBI.”

But Joyce has hinted that the memo was so scandalous that “termination would be the least of these people’s worries” and suggested that some of the people involved might even be “prosecuted.”

The report was spearheaded by Nunes.

Over the weekend, Nunes met with Judiciary Committee Chairman Bob Goodlatte, R-Va., and House Oversight Committee Chairman Trey Gowdy, R-S.C., to discuss the possibility of releasing some of the information from the classified document.

Calls from Republicans to release the memo have been intensifying in recent days.

“The House must immediately make public the memo prepared by the Intelligence Committee regarding the FBI and the Department of Justice,” Gaetz said.

“Part of me wishes that I didn’t read it because I don’t want to believe that those kinds of things could be happening in this country that I call home and love so much,” he added.

Rep. Scott Perry of Pennsylvania stated bluntly, “You think about, ‘is this happening in America or is this the KGB?’ That's how alarming it is.”