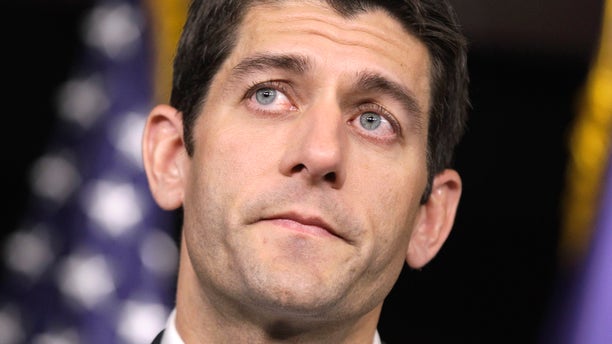 He's a rising star on the right and a growing target on the left.

Washington is buzzing about Wisconsin Rep. Paul Ryan's take-no-prisoners approach to budget cuts -- manifested in his budget proposal that would slash federal spending by $6.2 trillion over 10 years and overhaul health programs for the elderly and poor.

As Congress wages an epic budget battle that threatens this weekend to shut down the federal government for the first time in 15 years, Ryan's willingness to offer specifics on how to tame deficits and preserve the American safety net is boosting his profile among Republicans and stirring speculation that he may be on the short list of GOP vice presidential contenders.

"I think that Paul Ryan is the brightest light in the Republican Party right now," said former Sen. Bob Kasten, a fellow Wisconsin Republican who once employed Ryan. "And the courage he's shown is unlike anyone in Washington today, including the president."

"Whether for president or vice president or for further leadership in Congress, he's on everyone's list," he said, adding that the choice would be up to him.

Ryan, 41, is chairman of the House Budget Committee and known as the Republican go-to guy on fiscal policy, a position that has placed him at the center of the most contentious Capitol Hills debates in recent years, including Obama's health care overhaul. But his new budget proposal is elevating him to a new level of fame or notoriety, depending on which side you're on.

He wants to tackle the $14.3 trillion national debt while reducing the deficit by $4.4 trillion over the next decade. He wants to cut the top tax rate for both individuals and corporations from 35 percent to 25 percent. He also wants to transform Medicare into a system in which the government would pay for private health insurance plans instead of paying doctors and hospitals directly.

While Republicans have called it a good starting point, Democrats are dismissing it as an attack on senior citizens.

Ryan says he's not surprised by the reaction.

"I always knew if you put bold reforms out there, you'll have the partisan demagoguery," he told Fox News Wednesday, contending that's why nothing gets done in Washington.

"We can't keep doing that in this country," he said. "We got to stop spending money we don't have."

Ryan said his budget proposal is driven by his desire to leave behind a better country for his three young children.

"I'm putting out a budget plan that we're bringing to committee to save trillions of dollars so we can give our children a debt-free nation and get this economy growing again."

This isn't the first time Ryan has stepped onto the national stage or been in the crosshairs of liberals.

During last fall's election season, Democrats attacked Ryan's proposal of "A Roadmap for America's Future," which offered workers under 55 the option of investing part of their Social Security taxes in government-run personal retirement accounts. Those choosing to invest would get a lower guaranteed Social Security benefit when they retire.

But Republicans still recaptured the House and increased their ranks in the Senate.

"What's great about Ryan, not only is he a great communicator but he knows what he's talking about," said GOP strategist and former Capitol Hill aide Ron Bonjean, a Wisconsin native. "He provided the Roadmap to America, which helped Republicans win the majority in the House. Now he's providing a budget that can help presidential candidates communicate their vision on where they want the country to go."

Ryan grew up in Janesville -- a southern Wisconsin town near the Illinois border -- and graduated from Ohio's Miami University. Elected to Congress in 1998 at the age of 28 as the youngest member of the freshman class, he is now serving in his seventh term. Ryan, who has described himself as a nerd when it comes to budgetary issues, declined an offer from former President George W. Bush to be his White House budget director in his second term.

As a member of Obama's presidential deficit commission, Ryan, like other House participants, refused to support the final recommendations made by its co-chairmen late last year because it included tax increases, and he said it didn't go far enough in controlling health care costs.

In January, Ryan went head-to-head with Obama, giving the official GOP response to the president's State of the Union address. Ryan declared the nation was at a tipping point leading to a bleak future if federal deficits weren't trimmed. His speech, however, was overshadowed by Rep. Michelle Bachmann bucking Republican leadership to deliver what she called a Tea Party response.

Now Ryan is casting a long shadow himself with his budget plan.

"The budget he proposed is bold, controversial and eye-opening to many ," Bonjean said. "It will be discussed in political science classes for years to come."

Bonjean said the budget represents a "strategic vision on where he wants to take the country."

"That is one area lacking right now in the presidential cycle," he said. "We need leaders who can say this is where the country should go and here's the fiscal budget to do it."