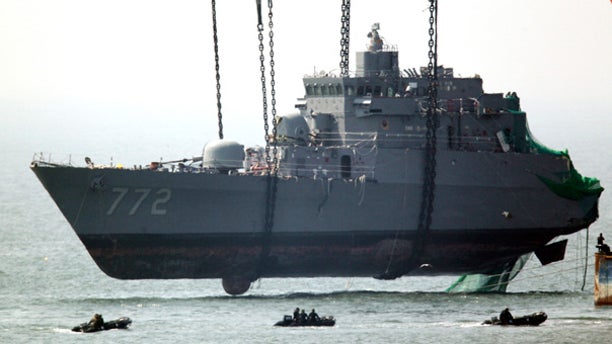 The administration said it endorsed President Lee Myung-bak's demand that "North Korea immediately apologize and punish those responsible for the attack, and, most importantly, stop its belligerent and threatening behavior."

Seoul can continue to count on the full backing of the United States, the White House said.

"U.S. support for South Korea's defense is unequivocal, and the president has directed his military commanders to coordinate closely with their Republic of Korea counterparts to ensure readiness and to deter future aggression," the White House said.

The South Korean president said Monday that his nation would no longer tolerate the North's "brutality" and said the repressive communist regime would pay for the surprise March 26 torpedo attack.

He also vowed to cut off all trade with the North and to take Pyongyang to the U.N. Security Council for punishment over the sinking of the warship Cheonan.

The attack was South Korea's worst military disaster since the Korean War.

Speaking earlier in Beijing, U.S. Secretary of State Hillary Rodham Clinton said the North must be held accountable and she is pushing to get the support of China, North Korea's top ally, for diplomatic action.

A team of international investigators concluded last week that a North Korean submarine launched the torpedo that split the Cheonan in two.

Obama, in response to North Korea's pattern of "provocation and defiance of international law" has ordered U.S. government agencies to review their policies toward Pyongyang.

The White House said Secretary of Defense Robert Gates remains in close contact with the South Korean defense minister and will meet with him next month in Singapore.