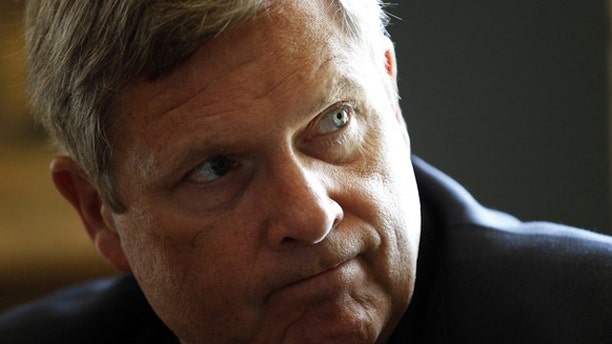 In this Aug. 10 file photo, Agriculture Secretary Tom Vilsack listens to a question during a media roundtable at the U.S. ambassador's residence in Ottawa, Canada. (Reuters Photo)

A handful of Republican lawmakers is warning against Congress approving a massive discrimination settlement that passed the Senate last week despite concerns the claims process may have been marred by thousands of potentially fraudulent applications.

Just before breaking for Thanksgiving recess, the Senate approved by voice vote a $4.6 billion package to settle claims against the government by black farmers and American Indians. The payments to black farmers account for $1.2 billion of that amount but have been the subject of intense criticism.

Lawmakers raising alarm about the payments say whistleblowers from the Department of Agriculture have come to them in confidence to warn that the money is going to claimants who don't deserve it.

Rep. Michele Bachmann, R-Minn., told FoxNews.com on Tuesday that she's been told people who have no connection to farming are set to receive payments under the so-called Pigford settlement.

Citing reports that Hispanic and women farmers are also seeking payments from the Agriculture Department, she said: "It looks like this has more to do with politically correct reparations."

Bachmann added that if the discrimination really was as widespread as the settlements suggest, "The USDA should just be completely shut down."

Bachmann, along with Reps. Steve King, R-Iowa, and Bob Goodlatte, R-Va., point to a red flag in the numbers -- while Census data pegs the number of U.S. farms operated by black farmers at about 33,000, close to 94,000 claims have been made so far in the discrimination case.

The Agriculture Department disputes the allegations, noting that similar charges surfaced after an earlier round of settlements was announced in 1999. According to the department, the FBI in the end found just three fraudulent claims among the 15,000 recipients at the time. Part of the reason there are so many more claims than farmers this time around, according to the department, is because family members and retired farmers -- who may have been forced out of business due to discrimination -- are eligible.

"These accusations are nothing more than an attempt to derail an effort to provide long-overdue compensation to thousands of farmers who were discriminated against over several decades," a department spokesperson said in an e-mail, stressing that the claims process has "integrity" and safeguards against fraud.

With tax cuts and a controversial arms treaty with Russia dominating discussion ahead of the last leg of the lame-duck session, concerns about a decade-old discrimination case might not rise to the scrutiny the lawmakers are demanding.

A congressional aide said Tuesday there's a "very slim" chance the bill would be defeated in the House since the chamber has voted for the settlement funding before. Democrats, who largely support the funding, hold the majority until the beginning of the next session in January and have every motivation to clear this off their plate before Republicans take control. At that point, the process for the settlement funding would have to start over.

House Speaker Nancy Pelosi vowed last week to advance the bill "without delay" in order to get it to President Obama's desk and "finally close the door on these injustices." According to Pelosi's office, the bill will hit the floor next week and is expected to pass.

The Pigford case dates back to a 1999 court-approved settlement made to resolve discrimination claims filed between 1983 and 1997 -- the settlement was reached following claims that minorities had received paltry amounts in farm loans and payments compared with their white counterparts. According to a Congressional Research Service report this year, the average loan amount to black farmers as recently as 2007 was $28,000, compared with $88,000 for white farmers.

About $1 billion has been paid in the first round of settlements. But Congress pushed a second round of payments for so-called Pigford II cases -- to pay for those who did not meet the original submission deadline in 2000. Congress authorized $100 million for new payments in a 2008 farm bill and then added more than $1 billion to that this year after Attorney General Eric Holder and Agriculture Secretary Tom Vilsack announced a new settlement with black farmers in February. That's the amount that was funded by the Senate on Friday and moves next to the House.

Vilsack said in a statement last week that the settlement would "right the wrongs of the past" and that the Senate vote "marks a major milestone in USDA's efforts to turn the page on a sad chapter in our history."

The GOP lawmakers don't dispute that legitimate claims of discrimination have been made against the USDA by black farmers. They just say that an untold number of bunk claims have slipped through the cracks thanks to a process they claim does not require a whole lot of evidence in order for farmers to win the minimum lump payment of $50,000.

Former Agriculture Secretary Ed Schafer has also been critical of the process, warning that he was concerned during his tenure about potentially fraudulent claims.

But King warned in a press conference in September that the administration was turning a "blind eye to the fraud and corruption" in the process. He said USDA officials had told him that a majority of the claims are fraudulent.

Bachmann vowed that her party would hold hearings on the case once Republicans take the majority.

"This just belies any statistical possibility that this could be true," she said. "All of this smells so bad that it is begging to be investigated. ... We cannot allow this money to go out when there's so many obvious questions."