MANCHESTER, N.H. -- When it comes to the escalating crisis with Iran, Democratic presidential primary candidate Amy Klobuchar is saving most of her ammunition for President Trump.

On Tuesday, the senator from Minnesota accused the president of making “a rash decision without thinking of the repercussions” when he last week ordered a U.S. airstrike that killed Iranian military leader Qassem Soleimani.

But she also indirectly fired away at 2020 nomination rival Joe Biden as she spoke to reporters while campaigning in New Hampshire.

Asked about Wednesday’s upcoming classiifed briefing, when the administration is expected to provide members of the Senate with evidence detailing the drone strike in Iraq that took out Soleimani, Klobuchar -- without prompting -- brought up her opposition to the Iraq War.

“I think too many times people can come to quick conclusions until you see that evidence. Certainly I was against the Iraq War, and actually it was a major issue in my campaign the first time I ran for the Senate because the congressman on the other side of me -- he supported it. I think some people weren’t looking at evidence. I think it’s important to look at evidence,” she said.

While not mentioning Biden by name, it appeared Klobuchar was targeting the former vice president.

The crisis with Iran gives Biden the chance to showcase his decades of foreign policy experience in the Senate and as vice president under President Obama. But his Iraq War vote from nearly two decades ago complicates matters.

Biden, as a senator from Delaware and longtime Foreign Relations Committee member, in 2002 voted to authorize military action in Iraq.

Democratic presidential nomination rival Sen. Bernie Sanders of Vermont has repeatedly slammed Biden for that vote. Sanders, a member of the House of Representatives at the time, opposed green-lighting the war.

Like other Democrats who voted in favor of the war at the time, Biden has spent the years since apologizing for his vote, as the war became increasingly unpopular with Americans and specifically Democratic voters. 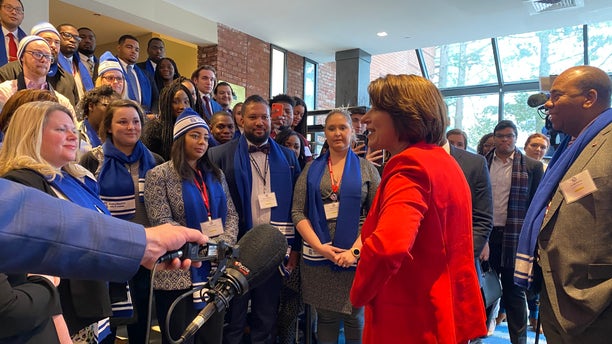 Democratic presidential candidate Sen. Amy Klobuchar of Minnesota speaks with members of the College Convention, in Manchester, NH on Jan. 7, 2020.

In the days since last week’s Soleimani strike, Sanders has repeatedly called the killing of the Iranian military leader an “assassination.”

Asked by Fox News if she agrees with her rival from Vermont, Klobuchar answered: “Again, I’m going to look at the evidence.”

But the senator quickly pivoted to Trump, saying: “But what I do believe is that, once again, is that this president may have done something very rash and made a rash decision without thinking of the repercussions.”

Klobuchar was in New Hampshire to address the College Convention, a quadrennial gathering of college students to discuss political science and hear from the presidential candidates.