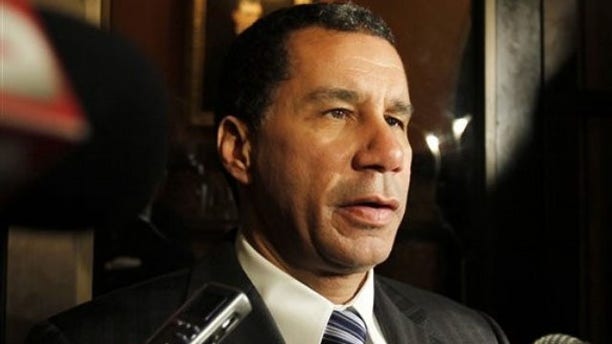 The developers behind a proposed Islamic cultural center near Ground Zero deny there are any plans to relocate, despite claims that New York Gov. David Paterson has renewed efforts to broker a deal over the project.

Paterson last week offered his help and the possibility that state land could be used for an alternative site for the project.

"We are working with the developers on a staff level but there have not been any formal discussions between the governor and imam or developer," Morgan Hook, a spokesman for Paterson told The Wall Street Journal. "However, we expect to have a meeting scheduled in the near future."

Hook declined to say whether Paterson would offer state land to relocate the project -- a proposal he floated last week.

Rep. Peter King, a Long Island Republican who opposes the site of the project, said Paterson phoned him Tuesday to say he planned to meet with the developers to talk about an alternative site.

However, project organizers denied there was any consideration being given to moving the mosque. A written statement from the Cordoba Initiative, the group pushing to build the Islamic center in lower Manhattan, said no meetings have been scheduled between Imam Feisel Abdul Rauf and Paterson, "nor have there been any communications between the offices of Cordoba Initiative and the governor."

After a similar report appeared Monday in an Israeli newspaper, Sharif El-Gamal of SoHo Properties, which owns the property at Park 51, said it's absolutely wrong to suggest that the site is being abandoned.

"The reports that we may be abandoning the project are completely incorrect. We are committed to our plans of building Park 51 to serve the community of lower Manhattan. Our mission is one of peace, understanding and tolerance," he said.

The 13-story Islamic cultural center and mosque that would be located two blocks from where the World Trade Center stood until Sept. 11, 2001, has raised a national argument over the First Amendment and anger over the terror attacks.

Supporters say the mosque and its founders do not represent the beliefs of anyone associated with the attack on the U.S. that day, and its construction will represent the freedom of religion that America prizes.

Opponents say it's not a constitutional question, but one of right and wrong since no one wants to deny the Muslim community the right to practice its religion, but to show a greater respect and sensitivity for the tragedy.

The issue has caused a major debate among politicians, including President Obama, whose various comments over the weekend have forced lawmakers on both sides of the aisle to stake positions on whether they support the mosque's location or prefer the developers to move it.

Congress and the White House have no recourse to prevent its construction, and local officials last week approved new construction at the site, which is currently an old Burlington Coat Factory building that suffered damage from landing gear from one of the planes that hit the Twin Towers.

Late Monday, Senate Majority Leader Harry Reid, who is in a tough race for re-election, suggested SoHo Properties find an alternate location. The statement was cast as a break from the president on an increasingly unpopular issue.

The White House said Tuesday it got the heads-up from Reid that he was going to side against the mosque's site.

"We had a sense of what they were going to do," White House spokesman Bill Burton said, describing Reid as an independent individual and strong leader in the Democratic Party.

However, one imam who complained that Muslims are being prevented from building mosques elsewhere around the country chastised Reid.

"It has political capital, but very negative political capital. It speaks to the worst of politics to advance aspirations for the White House, Senate or House or people already in the Senate, the majority leader of Senate, because the race is so close in Nevada. I'm talking about Harry Reid," Mahdi Bray, executive director of Muslim American Society Freedom.

Meanwhile, House Minority Leader John Boehner, R-Ohio, who strongly opposes Park 51 as the site for the mosque, will attend a previously scheduled appearance at a fundraiser Friday night for Chris Gibson, a GOP congressional candidate in upstate New York, who says political opponents have tried to distort his stance that there should not be a mosque near Ground Zero.

"As someone who wore our nation's uniform and helped fight against those who share the extremist views of our attackers on that fateful day, I am disappointed political operatives would distort my words on the matter of how we best honor the victims of the 9/11 attacks," he said in a written statement.

"I do not support the construction of a mosque and have always felt it's neither the time nor place for it," he said.