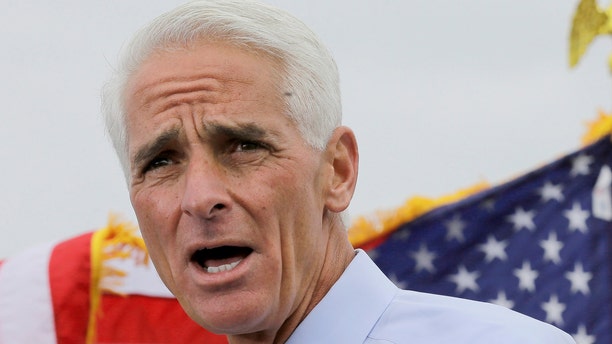 Florida gubernatorial candidate Charlie Crist is taking heat for his call to lift the U.S. trade embargo on Cuba -- the latest episode in which Democrats and Republicans have attacked him for flip-flopping on everything from policy to his choice of political party.

Crist, now a Democrat, was squeezed from both sides earlier this week after saying he was in favor of lifting the 52-year-old embargo on communist Cuba, calling it an obviously “failed” policy that needs revamping.

The 57-year-old Crist took to social media to better explain himself after his remarks on HBO’s “Real Time with Bill Maher.”

“After more than 50 years of hoping the embargo would bring freedom to Cuba, it’s time to admit that it has failed,” he posting on his Facebook account. “We should replace it with a policy that facilitates more trade and more exchange of ideas and values, while simultaneously keeping the pressure on the regime for their human rights violations.”

However, the flood gates had already opened.

“It is not the time to unilaterally go in and lift the embargo until we see some iron-clad guarantees that freedom of speech, freedom of the press, freedom of the assembly is being allowed inside Cuba by the police state that is still run by the Castro brothers,” said Florida Democratic Sen. Bill Nelson.

The Florida Republican Party said Crist’s position was “so far out the mainstream” that he’s gone to the left of Nelson, who voted last year with President Obama 100 percent of the time.

Among the first Washington Republicans to attack was Florida’s junior Sen. Marco Rubio.

“It’s just the latest in a series of flip-flops that he’s undertaken on public policy,” Rubio, who parents immigrated from Cuba in 1956, told The Miami Herald on Monday. “My interests in Cuba are about the freedom and liberty of the Cuban people. I wish he’d make that a priority.”

Florida Reps. Illena Ros-Lehtinen and Mario Diaz-Balart were among the other Republicans to hammer Crist.

While serving as Florida governor from 2007 to 2011, Crist, then a Republican, signed into law a bill that forced travel agencies to post a $250,000 bond to book flights to Cuba. A federal court eventually struck down the law.

And in 2010, while Crist was running as an Independent for U.S. Senate seat in Florida, he agreed with other candidates that the embargo should remain.

“Democrats have to be wondering, will [Crist] use us to be something else next year," Florida Senate President Don Gaetz, a Republican, recently told Reuters.

The older generations of Cuban exiles in Florida vote overwhelmingly Republican. But Crist could be trying to win votes from their children and grand-children, who lean Republican but are more open to ending the embargo, according to 2012 general election data.

President Obama eased travel restrictions Cuba in January 2009 but is opposed to lifting the embargo.

The conservative-leaning magazine The National Review compiled a list several years ago of Crist’s apparent flip-flops including him suggesting that as a  senator he would have voted for ObamaCare, then saying within hours the legislation was too big and expensive.

Crist also denounced offshore drilling when running for governor in 2006, then embraced the “drill baby, drill” mantra when the possibility arose that he might be 2008 GOP presidential nominee John McCain’s running mate, according to the magazine.