Costs of ObamaCare bungles start to add up, with Maryland first at about $30.5M 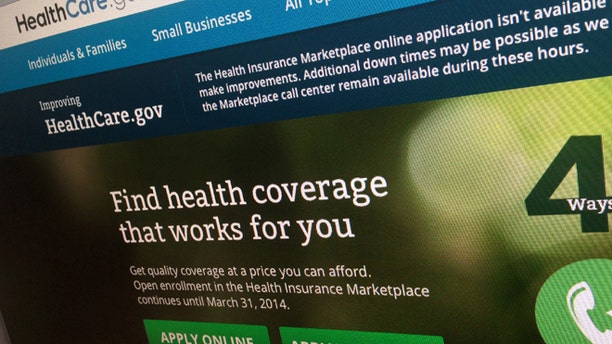 Maryland could end up spending as much as $30.5 million as a result of a glitch in its ObamaCare website, as the Obama administration steps in to help states with problematic exchanges.

Because of Maryland’s defective exchange, the state cannot determine whether customers remain eligible for Medicaid, according to a report by state budget analysts released Thursday.

As a result, the state has agreed with the federal government to a six-month delay in determining eligibility, meaning that payments will continue to be made to customers who are not eligible until the system is fixed. The delay will cost the state $17.8 million in fiscal 2014 and $12.7 million in fiscal 2015, the analysts estimated.

On Friday, the Obama administration said it would suspend some Affordable Care Act rules to help the 14 states with their own ObamaCare sites, particularly Maryland, Massachusetts, Hawaii and Oregon, which have had the most problems.

The federal Centers for Medicare and Medicaid Services plan, completed a day earlier, states the federal government will help pay for “qualified” health-insurance plans for customers in those states who because of “exceptional circumstances” had to buy plans outside of ObamaCare exchanges, as reported first by The Washington Post.

The administration made the change before the end-of-March deadline for Americans to enroll in ObamaCare this year.

In Maryland, the exchange cannot convert income data from the existing Medicaid enrollment system into a calculation needed to review whether enrollees are qualified “because of a variety of system architectural flaws,” according to budge analysts.

The exchange has been plagued by computer problems that have made it difficult for people to enroll in private health care plans since its debut Oct. 1.

Among the possibilities is adopting technology developed by another state, joining a consortium of other states, partnering with the federal exchange or making major fixes to the existing system.

Thirty-six states use the federal HealthCare.gov site, which crashed and had other major problems in the first two months of enrollment.

The Maryland report said the state may need to develop an interim solution while a long-term solution is being developed. However, that process would likely take at least nine to 12 months, pushing up against the next open-enrollment period.

The report also states the development of the exchange was “a high risk undertaking” from the outset, in large part because of contractors woes, tight deadlines, constantly evolving requirement and its need to interface with work-in-progress federal databases.

The administration changes this week are not the first to ObamaCare, to be sure.

In November, Obama helped Americans about to lose policies because they didn’t meet new minimum requirements by allow the substandard plans to be sold through the end of this year.

And administration officials has twice this year given medium- and large-sized employers more time to offer health insurance to most full-time workers.

However, the change this week is significant because it marks the first time the federal government has agreed to help pay for policies bought outside the new exchanges.

The coverage in the outside policies would have to be comparable to those offered on the exchange. And customers would have to start paying premiums, then get the subsidies after the state exchanges could determine their income eligibility.

Maryland Health Benefit Exchange official told The Post earlier this week that roughly 7,000 applications are stuck in state’s system, but all of them might not need insurance and that officials were still looking over the administration’s offer.