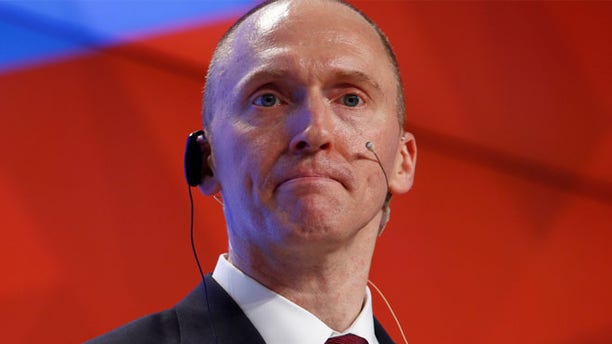 Former Trump adviser Carter Page on Monday told Fox News that he is cooperating with the Senate Intelligence Committee’s probe into the Trump campaign and contacts with Russia.

The unverified dossier, from former British intelligence officer Christopher Steele, identified Page as the campaign's point of contact with Russia. Page denied these allegations in an interview with Fox News last month, and said he was eager to cooperate with Congress.

Amid questions swirling in Washington that have forced the resignation of one top Trump official and the scrutiny of several others, most Americans say they're at least somewhat concerned about the possibility that the Republican businessman's campaign had inappropriate contacts with the Russian government, but, in an AP-NORC Center for Public Affairs Research poll, less than half say they're very concerned.

Questions about possible ties between Trump's associates and Russian officials have dogged the White House.

Since July, the FBI has been conducting a counterintelligence investigation into Russia's interference in the election and possible coordination with Trump associates. House and Senate intelligence committees, led by Republican lawmakers, are also investigating. Some Democratic leaders have called for an independent investigation, saying the congressional probes, particularly the House investigation, has been tainted by political interference from the White House.

Several Trump associates have been caught up in the controversy. Trump's first national security adviser, Michael Flynn, was forced to resign after he misled the vice president about conversations with a Russian ambassador. Attorney General Jeff Sessions has recused himself from the Justice Department investigation after he did not disclose a meeting with the same ambassador. White House senior adviser Jared Kushner has volunteered to be questioned by congressional investigators. Former campaign manager Paul Manafort's connections to Russia are part of the congressional probes.

The president has steadfastly denied any inappropriate links to Russia.

Page, who described himself as an oil industry consultant and U.S. Naval Academy midshipman, was a relative unknown when the Trump campaign announced his hiring as a foreign policy adviser in March 2016. He would stay with the Trump team until September 2016.