Canada cuts costs by eliminating penny, while US still clings to iconic coin 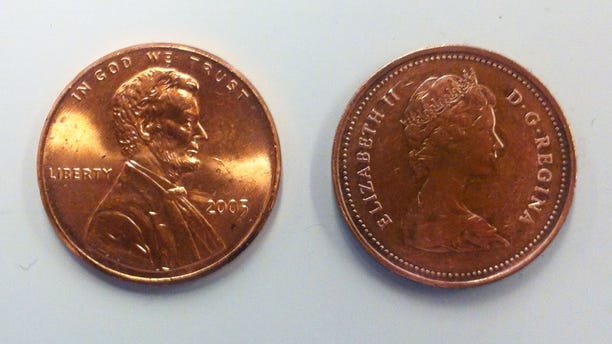 Canada officials have made the cost-cutting decision to start phasing out their penny -- could Abe Lincoln be next?

The United States has wrestled with a similar problem in recent decades.

The U.S. Mint reported last year that each penny costs the federal government 2 cents, which includes the price of production, transportation and the rising cost of zinc, the one-cent coin’s main ingredient. The price is down from 2.4 cents per coin as a result of more efficient production efforts, officials said Monday.

The estimated cost in Canada was 1.6 cents per penny.

Former Rep. Jim Kolbe unsuccessfully tried in 2001 and 2006 to eliminate the penny by congressional action. That idea could have new momentum now that fiscal conservatives in Congress are looking for ways large and small to cut federal spending.

“Right, left or center, all parties know that the country needs to save as much money as possible,” the group Retire the Penny says on its website. “And it’s impossible to save money when it’s being wasted.”

However, a House Budget Committee spokesman said the panel is not considered such a proposal, and he is not aware of one in another House committee.

And a new proposal to discontinue the penny would likely follow Kolbe's and Canada’s concept of rounding up prices to the nearest nickel for cash transactions. That would increase the cost of goods and services, which would also boost sales taxes. Electronic sales will remain unchanged.

Other countries have already dropped the penny, including Australia, Finland, New Zealand, Norway, the Netherlands and Sweden.

Canada still has roughly 35 billion pennies in circulation so they likely will remain in circulation for several years, going one by one into a foundry to be melted down and their metal recycled.