The firestorm over former Vice President Joe Biden’s comments this week highlighting his ability to work with segregationist Southern senators is bringing renewed attention to his 2003 eulogy for Strom Thurmond, the former South Carolina senator and “Dixiecrat” presidential candidate who supported segregation.

In his eulogy more than 15 years ago for Thurmond, who later became a Republican, Biden said that while their “differences were profound,” he got to know him and “watched him change, oh so subtly.”

“I went to the Senate emboldened, angered and outraged at age 29 about the treatment of African-Americans in this country, about everything for a period in his life Strom represented. But then I met the man,” Biden said at the time. 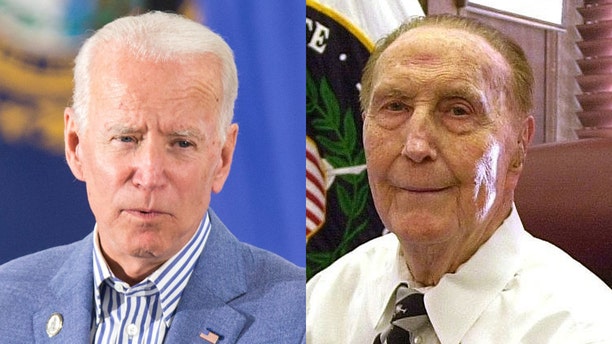 Biden called Thurmond a "brave man, who in the end made his choice and moved to the good side." He said they became “good friends.”

In 2010, Biden also eulogized the late West Virginia Democratic Sen. Robert Byrd, a former KKK member who later regretted that affiliation and described it as a mistake.

“Although I and my colleagues behind me revered the Senate, Robert C. Byrd elevated the Senate,” Biden said in his remarks in 2010.

By the time of his death, though, Byrd had allies even in the civil rights movement, with the NAACP at the time praising his legacy and his transformation from a former KKK member to a “stalwart supporter” of civil rights. Then-President Barack Obama, too, cited this evolution in honoring Byrd after he died.

Biden publicly spoke of Thurmond on other occasions: The Washington Examiner recently drew attention to another speech Biden gave in 1988; he recalled joining the Senate and said “it turns out one of my closest friends ends up being Strom Thurmond, a man whose background and interests, at the time I came, were considerably different than mine.”

Biden's 2020 presidential campaign did not immediately return a request for comment from Fox News.

Defenders of the former vice president cited his eulogy for Thurmond as another example of how Biden found a way to work with people in the Senate whose views were far different from his own.

“He spoke at Strom Thurmond’s funeral. Now does that mean he agreed with Strom Thurmond, the Dixiecrat candidate?” South Carolina Republican Sen. Lindsey Graham said Wednesday on Fox News’ "Special Report." “No, that means that over a 30-year period, they got to know each other, had definite differences, but they found a way to do business.”

But the eulogies from years ago could cause new headaches for Biden as he grapples with intense criticism from Democratic presidential primary rivals over the latest campaign trail controversy.

Praise for Thurmond famously ended the political career of another politician: then-Mississippi Sen. Trent Lott had to step down as Senate majority leader in 2002 after praising Thurmond’s run for president in 1948 as a Dixiecrat while attending Thurmond’s 100 birthday party.

The renewed attention over the Biden eulogy comes as Biden's campaign is defending his recent comments about being able to work with two other segregationists -- Sens. James Eastland of Mississippi and Herman Talmadge of Georgia. For his part, Biden has rebuffed calls for his apology.

Biden brought up the names of Eastland of Mississippi and Talmadge of Georgia while speaking at a fundraiser Tuesday in New York City. Eastland and Talmadge, two senior members in the Senate when Biden arrived in the chamber in 1973, were firmly opposed to desegregation efforts.

“I was in a caucus with James O. Eastland,” the 76-year-old Biden said as he briefly imitated the late senator’s Southern drawl. “He never called me boy. He always called me son.”

A Fox News camera was rolling Wednesday evening when Biden was asked if he was going to apologize for his remarks. “Cory should apologize,” Biden said in response. “He knows better. Not a racist bone in my body. I've been involved in civil rights my whole career. Period. Period. Period.”