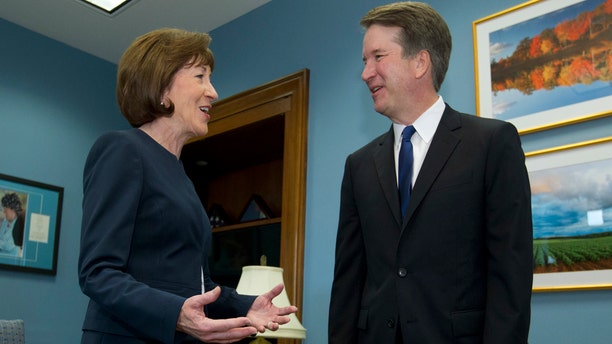 A crowdfunding campaign has raised over $1 million as of Tuesday for the opponent of Senator Susan Collins, R-Maine, if she votes to confirm Brett Kavanaugh for the Supreme Court, a move she likened to bribery.

Liberal activist groups have posted the campaign on the platform Crowdpac, drawing supporters and critics.

Collins called it an attempt at extortion in a response through a spokeswoman, according to The Washington Post.

“And anybody who thinks these tactics would work on Senator Collins obviously doesn’t know her,” spokeswoman Annie Clark said in a statement. “Senator Collins will make up her mind based on the merits of the nomination. Threats or other attempts to bully her will not play a factor in her decision making whatsoever.”

An ethics expert told The Post that “it may very well violate federal bribery statutes.”

But Jordan Libowitz, a spokesman for the Citizens for Ethics and Responsibilities, told the Post it doesn’t rise to the level of bribery, “because there’s no agreement.”

“It’s just the way money and politics tend to work these days,” he said.

Meanwhile, supporter Julie B endorsed the campaign, saying “women will stand together to protect our rights and what is right.”

“The people of Maine are asking you to be a hero, Senator Collins,” the campaign wrote. “… to stand up for the people of Maine and for Americans across the country, every dollar donated to this campaign will go to your eventual Democratic opponent in 2020. We will get you out of office.”