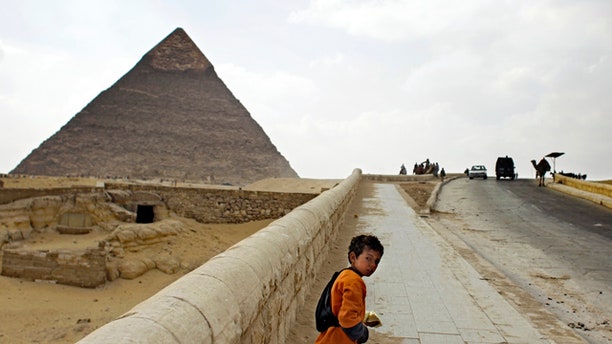 March 23: A young souvenir vendor walks along an almost empty road to the Giza pyramids on the outskirts of Cairo, Egypt. (AP2011)

There’s a controversy at my alma mater, the University of Michigan. Alas, it’s the sort of clamor all too common on campuses across the nation.

A fraternity, Delta Sigma Phi, planned to hold a party with an ancient Egyptian theme.  The invitation said to come “as a mummy, Cleopatra or King Tut.  It doesn’t matter to us.”

It sure mattered to the Egyptian Student Association. Its president Yasmeen Afifi wrote “these stereotypes [are] extremely offensive [....] As an actual Egyptian, my roots are more than a costume or a lame party.  My culture will not be appropriated for your entertainment.”

Ancient Egypt was a great and glorious culture. But it ended over 2300 years ago. Why does Afifi believe she has the privilege to determine who can use it and how? Let’s call it a statute of civilizations.

Also, according to Afifi, “the privilege within this appropriation is even larger” because the party was hosted by a white fraternity.

Delta Sigma canceled the party and apologized to students of color.  As they put it, “We completely accept all responsibility for this ordeal.  We will begin an education effort to teach ourselves how our actions have an effect on people from a wide variety of backgrounds. This situation will serve as a very teachable moment...”

I do agree it’s a teachable moment, but not for the reasons mentioned.

Ancient Egypt was a great and glorious culture. But it ended over 2300 years ago. Why does Afifi believe she has the privilege to determine who can use it and how?

Modern Egyptians live on the same land, but why should that confer upon them special gatekeeper status?  They don’t speak the same language as the ancient Egyptians, or wear the same clothes, or follow the same laws, or worship the same gods.

And even if Afifi believes her race or bloodline gives her special rights (though I thought we were past that), she still comes up short.  Ancient Egypt was taken over by the Greeks (that’s where we got Cleopatra), and then came the Romans, and later came Arabs in the name of Islam.  Then for centuries there was much trade going through Egypt.  Current research suggests Ancient Egyptians were genetically quite different from modern Egyptians.

In any case, if a particular culture hasn’t been around for, say, a thousand years or more, doesn’t it belong to the world?  Let’s call it a statute of civilizations.

Thus, while a college classics department can explore the glory that was Greece, and the grandeur that was Rome, that doesn’t mean students can’t enjoy an occasional toga party. (In fact, the whole fraternity system is called “Greek life” but you don’t hear students from Greece complaining.)

Indeed, people around the world have long used touches of ancient Egypt for decorative purposes.  I live in Los Angeles, about a mile from the Egyptian Theatre on Hollywood Boulevard, one of those great movie palaces built in the 1920s.  Should it be closed due to lack of respect?

What about the pyramids of America, such as the Luxor Casino in Las Vegas, or the Memphis Pyramid.  Should they be shut down?  (And the city of Memphis have its name changed, since they ripped that off from Ancient Egypt?) Heck, we have a pyramid on our dollar bill.  Should we apologize and send them to everyone who’s offended?

I’m not saying we shouldn’t respect the civilization built up by the ancient Egyptians.  I’m just saying we don’t need to be grim about it.

So there is cultural appropriation going on here.  The Egyptian Student Association think they own the ancient past.  They don’t.  It’s time to give it back.