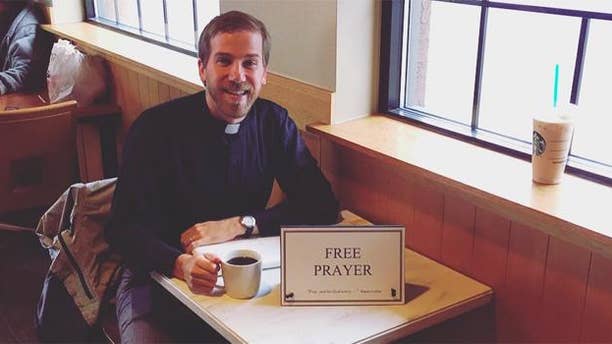 Coffee is not exactly Thomas Rusert’s cup of tea.

Nevertheless, every Thursday morning Pastor Thomas indulges himself in a steaming cup of java at local coffee houses.

“I’m a tea drinker all the other days of the week,” said Thomas, the associate pastor of St. Paul’s Lutheran Church in Doylestown, Pennsylvania. “I’m a weirdly patterned person.”

It does seem a bit unusual – akin to a vegetarian ordering tofu at a barbecue joint. But it turns the pastor’s weekly coffee klatch is all about prayer. Yes, prayer.

Every Thursday morning, Pastor Thomas puts on a clergy collar and sets up shop in a local coffee house. He sets out a little sign that reads, “Free Prayer,” and then waits to see who God sends his way.

“I’m humbled all the time by the way that the Spirit works,” the pastor told me. “God is working to give people the courage to say, ‘All right – I’m going to take this pastor up on this offer.’”

And they have – by the hundreds.

The “Free Prayer” program started quietly last summer – inspired by a word of advice Pastor Thomas had received from another member of the clergy -- a pastor is doing the job well when at least half of his or her time is spent outside the office.

That advice was something of an epiphany for the young Lutheran preacher. He wrote about his experiences next in a column titled, “Why I Offer ‘Free Prayer’ In A Coffee Shop.” “Sometimes we have to move beyond the shadows of a steeple to take care of our people,” he wrote. “And in so doing, we may just find that God takes care of us, too.

The preacher admitted to being a little more than nervous when he set up shop for the first time in the local outpost of Panera Bread.

“I went in with fear and trembling,” he recounted. “I put the sign up, put my nose into a book – I was afraid to make eye contact.”

But eventually, Pastor Thomas grew courageous – and soon the Lord was sending many customers to his table – wayfaring strangers looking for a place to cast their cares.

There was the owner of a Dunkin Donuts and the manager of Starbucks. There was someone whose nephew had an ailment and a schizophrenic who said she saw witches.

“Sometimes it’s a 45-minute conversation about someone who is searching for answers, saw the open chair and that invitation for prayer,” he said.

A stranger happened upon that empty chair last October. He had business at a nearby courthouse and had stopped by to get a cup of coffee. When he saw the pastor’s sign – tears filled his eyes. He left his coffee and the court documents on the table and walked outside. The pastor followed.

“As we strolled together over the next hour, I heard all the unuttered prayers and pains he had held inside for two years,” Pastor Thomas wrote of the encounter. “His wife had experienced an identity crisis and left him. A dear friend had died from a blood clot. An aunt had died from medical malpractice. Another friend had died from an overdose. Finally, death had taken his sister. Death had hollowed out [his] spirit, and he had spoken about it to no one.”

And so it was that on a brisk autumn day the spiritually wounded stranger had stumbled upon Pastor Thomas.

“It seemed that God had enacted a little apocalypse, an awakening in [his]) soul,” he wrote. ‘And all I had to do at first was sit there.”

Imagine what could happen if more of us followed the path of Pastor Thomas and stepped out of the church house and into the coffee house.

“Trust that God is already sitting with you – encouraging you and giving you the confidence to put yourself out there for the sake of your community,” Pastor Thomas told me.

So if you happen to be going through a rough patch in life -- consider making your way to a coffee house in Doylestown, Pennsylvania. Who knows – you just might discover a divine appointment of the caffeinated kind.