ACLU wants Kim Davis' 'scalp to hang on the wall' 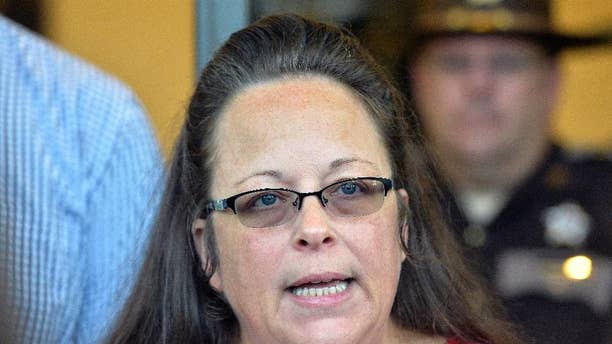 Rowan County Clerk Kim Davis makes a statement to the media at the front door of the Rowan County Judicial Center in Morehead, Ky., Monday, Sept. 14, 2015. Davis announced that her office will issue marriage licenses under order of a federal judge, but they will not have her name or office listed. (AP Photo/Timothy D. Easley) (The Associated Press)

“When I went back into that holding cell I hit my knees and just
prayed, just cried out for God to give me some peace and assurance that all was
going to be well – and I prayed and I sang,” she told me in her first digital
interview.

It was September 3 – the day Mrs. Davis became the first Christian
jailed as a result of the Supreme Court ruling legalizing gay marriage.

Federal Judge David Bunning ordered her jailed for contempt of
court after she defied a federal court order to issue marriage licenses to gay
couples. He denied her request to accommodate her religious beliefs by simply
removing her name from the marriage form.

“That’s all I ever asked for,” she said. “I didn’t ask for them to
jump over the moon and give me the stars and pull the sun down for me. I asked
a very simple and doable accommodation.”

Mrs. Davis, the clerk in Rowan County, was released five days
later after she agreed that she would not interfere with deputies who were
issuing licenses to gay couples.

Bunning said he was “satisfied that the Rowan County Clerk’s
Office is fulfilling its obligation to issue marriage licenses to all legally
eligible couples.”

However, the American Civil Liberties Union representing four
Kentucky couples contends that Mrs. Davis has altered marriage licenses -- making
them possibly invalid. And they want her held in contempt – again.

The validity of the licenses is “questionable at best,” ACLU
attorneys told the Washington Post. “What’s more, the adulterated marriage
licenses received by Rowan County couples will effectively feature a stamp of
animus against the LGBT community, signaling that, in Rowan County, the
government’s position is that LGBT couples are second-class citizens unworthy
of official recognition and authorization of their marriage license but for
this Court’s intervention and order.”

Mat Staver, of the Liberty Counsel law firm, is Mrs. Davis’
attorney. He said the ACLU’s allegations have no merit.

“They want her scalp to hang on the wall as a trophy,” he said.

Mrs. Davis is a follower of the Apostolic Christian faith and a
devoutly religious woman. She is uncomfortable in the public spotlight.

“I’ve been called Hitler, a homophobe, a hypocrite -- words I
didn’t even use when I was in the world -- words that are very vile and nasty,”
she said. “I’ve been called pretty much anything that you can think in your
mind.”

But the words did not hurt.

“It’s a righteous thing to defend the Word of God and I am so much
of a nothing -- to be used of God is just an honor and a privilege,” she said.
“I count it all joy.”

Our half-hour conversation was sprinkled with references to Bible
passages and worship songs. She frequently became emotional when talking about
her relationship with God.

She spent most of her time in jail reading her Bible and writing
notes and singing songs like, “What a Mighty God we serve.”

She especially took comfort in a passage of Scripture from the New
Testament.

“God did not give us a spirit of fear, but of power and of love
and of a sound mind,” she said, quoting Second Timothy 1:7.

But it was the following verse that gave her courage.

“Therefore do not be ashamed of the testimony of our Lord, nor of
me His prisoner, but share with me in the sufferings for the gospel according
to the power of God…”

“I walked and prayed and sang praises in the jail cell and just
really drew comfort from God’s word when I was there,” she told me.

Staver said he marveled at his client’s composure during their
first meeting inside the jailhouse.

“We hugged and shed a few tears and the first words out of her
mouth were, ‘All is well,’” Staver told me. “I went in there to encourage her, but
we went away being encouraged ourselves by her.”

She was at complete peace, Staver said.

“I think it’s hard for people to understand that, but there was a
definite peace,” he said.

Mrs. Davis told me it was worth every day behind bars.

“The Lord died and suffered so terribly for us and I counted such
a privilege and an honor and a joy that I would have to sit a mere five days in
jail to uphold His word,” she said. “For me, it’s worth it.”

Life is slowly returning to normal for Mrs. Davis. She’s back at
work at the clerk’s office – in early, out late. She dotes on her children and
grandson. And she finds time to read her Bible atop a hill on the family’s
property.

And in spite of the media firestorm, this nationally known
defender of religious liberty even found time to celebrate her birthday.

Mrs. Davis turned 50 on Sept. 17 – which just happens to be
Constitution Day.