A nun's hope for Francis’ papacy 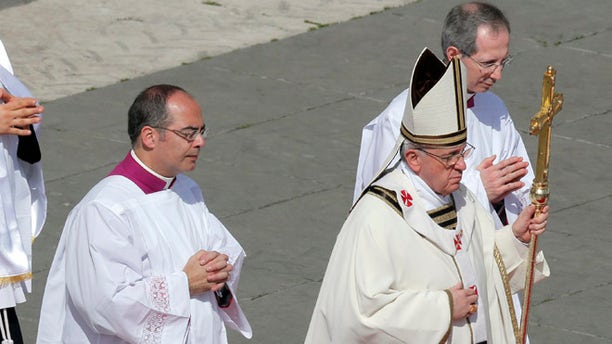 March 19, 2013: Pope Francis holds his pastoral staff as he celebrates his inaugural Mass in St. Peter's Square at the Vatican. (AP)

Six days ago the first  Jesuit pope Jorge Mario Bergoglio took St. Francis of Assisi as his patron and declared that he would be called Pope Francis. Today, he begins a post-modern papacy under the banner of a medieval mystic and reformer.

Why Francis? What's in this name? Is it symbolic or substantive? These—and similar questions—swirled in the media coverage almost immediately after the announcement of the new pontiff’s choice: Pope Francis.  The new pontiff’s  intention is clear. The fame of St. Francis’ care for the poor motivated his choice. Many strands make up the fascinating story of Francis. A mysterious embrace of a poor way of life is most prominent, but it is hardly the whole of the tale.
What was this medieval saint’s rapport with women? How did he interact with women leaders of Umbrian and Roman religious circles who figure prominently in his biography? Will Pope Francis also remember that Francis of Assisi also inspired new expressions of religious life? This is the question uppermost in the minds of the many religious congregations of sisters of the United States.

In the past five years many apostolic (differentiated from monastic or contemplative) congregations have experienced a series of investigations of individual sisterhoods to assess compliance with church discipline. This program was followed by imposed reforms of the Leadership Conference of Women Religious. This has strained relationships between the sisterhoods and the Vatican.  Officials of the Leadership Conference have taken great pains to contain the controversy by depriving the fire of the oxygen of public comment. Theirs has been an attitude of “stay calm and carry on.” Catholic laity and  clergy were quick to rise up in the sisters’ defense. They point to their  leadership of Catholic institutions of health care, social service, and education. Those institutions impact lives in profound and pragmatic ways. Loyalty to the sisters  is not pious sentiment restricted to “cradle Catholics.” It is rooted in transformative encounters with  the sisters  as they do the work of Christ. It is stoked by the sight of lives burning down like candles in the sacrifice of unceasing  service to the neighbor. That neighbor may live next door or on the next continent. No matter. Some sister will be near—in Newark or New Guinea-- with a response to almost every human need.

Weaknesses in program and process emerge in complex institutions over time. On-going reform and renewal  is a constant organizational theme. Religious congregations are complex.  Each religious congregation, however, has built into its Vatican-approved constitutions corrective options. Members elect their own executives in cycles of four to six years. Failures of observance of regulations  or theological mis-interpretation can be confronted in assemblies to which all members have access as well as voice and vote.  Periodic reviews of a commuity’s spiritual vitality and corporate commitments  are common. Do some serious problems emerge and call for formal intervention? Certainly…. and rarely! Thus the recent spate of generalized disciplinary actions have saddened the Catholic sisters. Fellow Catholics have demonstrated a rare sense of urgency in calling for a halt.   What will Pope Francis do?

The first Francis was a man of medieval culture and sensibility.  He did not automatically see women as equals and did not quickly offer equal status to the women who tried to follow his new Gospel-based movement. He was no proto-feminist. He was, however, profoundly imbued with a sense of the relationship of every living creature to the paternal power that he viewed as coming from God.  He saw the maternal resonance of that power in the deep life-springs of all of creation. All things stood in mutual  divine interdependence. Every creature was alive to him. The sun was a brother, the moon  and stars, his sisters. With time  and testing experience,  he learned that the women who were intent on sharing his vision of evangelical living were his spiritual and moral  equals. He  eventually conferred a written promise of mutual respect and advocacy for  St. Clare—the first among these early female adherents—and the women who joined in her community. She herself hints that this conversion to fully mutual trust took time. Francis and Clare asked for the “privilege of poverty.” It was a papal permission to prove the traditional forms of economic security (property and patrimony) were no longer suited for the Church’s mission in a new  era of commercial and social innovaton. In a world in which the “battle of the sexes” seems to take new forms in each generation, the example of Francis and Clare holds out the promise that men and women can find a path of collaborative enterprise that brings new elan to an ancient faith.

A Christian plan leaves room for the Holy Spirit to breathe forth the surprises of history. Wednesday, March 13, 2013 was a day that will forever be remembered for just such a Spirit-borne surprise. The sisters warmly welcome Pope Francis and they nurture the hope that the surprises are not over.

Sr. Margaret Carney, OSF, STD, is president of St. Bonaventure University and the author of "The First Franciscan Woman: Clare of Assisi and Her Form of Life."