A faraway planet that could sustain intelligent life is finding backers 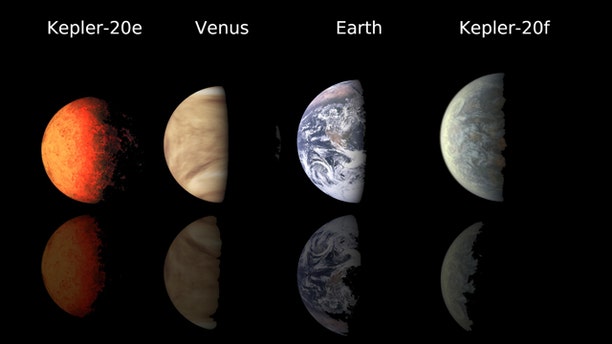 This chart compares the first Earth-size planets found around a sun-like star to planets in our own solar system, Earth and Venus. NASA's Kepler mission discovered the new found planets, called Kepler-20e and Kepler-20f. Kepler-20e is slightly smaller than Venus with a radius .87 times that of Earth. Kepler-20f is a bit larger than Earth at 1.03 times the radius of Earth. (NASA/JPL-Caltech/T. Pyle)

NASA has discovered the answer to all of our problems. It is another planet, a possible twin to Earth that could theoretically sustain life.

This revelation could be bigger than Columbus "discovering" America, or Lewis and Clark finding the Northwest Passage.

It offers the possibility of starting over. Hasn't the thought crossed the mind of every adult of a certain age that if we could time travel back to our youth and know what we know now, we would not have made the mistakes we made?

The first step in boldly going where no one has gone before is to rename the planet. Kepler-452b won't do. How about Krypton? That name is already widely known as the fictional planet from which Superman came, thus giving it cultural standing. Steven Spielberg could make a film about our new second home. ET might even be there to welcome us.

Then we have to figure out a way to get there. Kepler-452b is 8,400 trillion miles away. Using present technology it would take 25.8 million years to get there. To reach the planet, people would have to reproduce in space, creating multiple generations of descendants. How would the new arrivals find materials to build anything? We'd be starting over like cavemen, though that should not deter us. Early pioneers didn't give up when they encountered obstacles.

What is really interesting is that Kepler-452b is not the only planet with an environment thought capable of sustaining life. The Kepler spacecraft has found more than 4,000 planets in the so-called "Goldilocks Zone," meaning they have temperature ranges that could support at least plant life and possibly more advanced life forms.

This could be the solution we have been looking for. Republicans and Democrats could have planets of their own, which could settle once and for all the argument over whether big or small government is best; not that one would be able to convince the other, even if verifiable proof could be presented. The same goes for global warming proponents and climate change deniers.

Criminals would have their own planet where they could prey on each other instead of the rest of us, thus "solving" the crime problem. And the gun control crowd could inhabit a planet where all guns would be banned, though sticks and stones, mankind's first weapons, would remain. It would be left to the peace-loving citizens of "gun-free-opolis" to work things out among themselves, but they would have achieved their ultimate goal — no guns.

There is just one overarching challenge for those who might like to travel to this new world. How do you solve the problem of human nature? Travelers would take that nature with them, as illustrated in William Golding's classic novel "Lord of the Flies" in which a group of children crash on a remote tropical island and, cut off from civilization, slowly turn into savages.

Russian entrepreneur Yuri Milner recently announced a $100 million, 10-year project to search for intelligent life in the universe. Stephen Hawking, the physicist, has signed on to work with him. They are wasting their time and money. However, given the lack of intelligence on Earth, I can't blame them for looking elsewhere.