2016: Hillary Clinton and the O'Malley factor 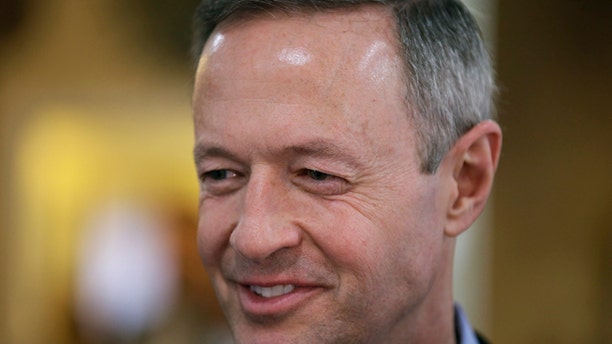 Martin O'Malley, former Baltimore mayor and Maryland governor, announced his presidential candidacy on Saturday, and said some things that could be taken as criticism of President Obama and former Secretary of State Hillary Clinton.

"Today, the American dream seems for so many of us to be hanging by a thread," said O’Malley, adding "We must save our country now. ... Tell me how it is that you can get pulled over for a broken taillight in our country, but if you wreck the nation's economy, you are untouchable."

Who is he blaming for "wrecking" the economy? Big banks and Wall Street, not the Obama administration, which has presided over slow economic growth, an increase in the number of Americans who want to work but can't find jobs and more than 46 million people on food stamps. Last month, the Commerce Department reported the economy contracted 0.7 percent in the first quarter of 2015.

Wasn't President Obama elected to fix all this? When he promised to "fundamentally change" the country, I doubt most Obama worshippers had this kind of country in mind.

Unlike Hillary Clinton, O'Malley's chief rival for the Democratic nomination, he has a record of sweeping, identifiable initiatives, which did little to improve conditions for the poor in Baltimore.

O'Malley seems to be positioning himself like the British monarchy, which has an "heir and a spare." For now Hillary Clinton is the "heir" to the nomination, O'Malley's the "spare."

As Baltimore's mayor, O'Malley promised to reclaim the city's abandoned and uninhabitable buildings. Yet, between 2002 and 2007, the number of vacant and abandoned residential properties in the city actually increased by 2,570, to more than 15,700, according to The New York Times, which cites statistics from the Baltimore Neighborhood Indicators Alliance.

Poverty and unemployment remain high in Baltimore. A survey released in April by two Harvard economists ranked the city at the bottom among the country's 100 largest cities as the jurisdiction least likely to allow children to escape poverty. One contributing factor could have been O'Malley's refusal to allow school choice so poor parents could exercise an option available to wealthier and more influential people.

As governor of Maryland, O'Malley was a serial tax hiker. As summarized by The Daily Caller, O'Malley raised the top personal income tax rate from 4.75 to 5.75 percent. Adding local taxes gave Maryland a top tax rate of 8.95 percent. O'Malley also presided over a corporate tax hike from 7.0 to 8.25 percent. He raised the sales tax from 5 to 6 percent, increased taxes on beer, wine and spirits by 50 percent, raised the gas tax by 20 cents over four years, almost doubling the rate from 23.5 cents, doubled the cigarette tax from $1 to $2 a pack, imposed higher taxes on vehicle registration and created a "stormwater mitigation fee" on property owners, derided as a "rain tax." And what did the people most in need get from all this extra tax money? Not much it appears.

This constant taxing and overspending contributed to the defeat of O'Malley's handpicked successor, Anthony Brown, and the election of Republican Larry Hogan. It also caused an exodus from the state by some fed-up taxpayers. In 2012, CNBC cited a study by the anti-tax group Change Maryland that found that "a net 31,000 residents left the state between 2007 and 2010, the tenure of a 'millionaire's tax' pushed through by Gov. Martin O'Malley. The tax, which expired in 2010, imposed a rate of 6.25 percent on incomes of more than $1 million a year."

One of O'Malley's problems is that if he tracks too far left he runs into the socialist gadfly Sen. Bernie Sanders, D-Vt. Instead, O'Malley seems to be positioning himself like the British monarchy, which has an "heir and a spare." For now Hillary Clinton is the "heir" to the nomination, O'Malley's the "spare." That could change if questions about the Clintons' finances persist.

If O'Malley doesn't win the nomination, he will at least have raised his profile for another run in four or eight years. By then, maybe he can find a better platform to run on than the one he has now.