Bride upstaged by smiling horse at her wedding 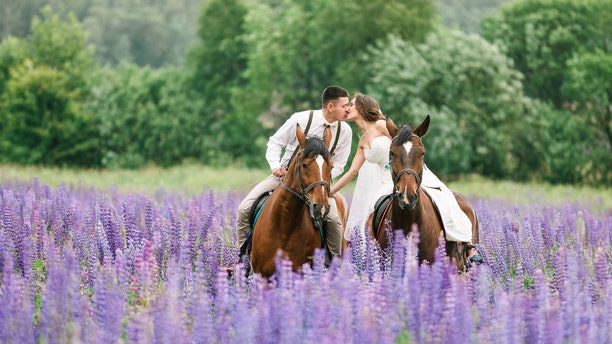 The bride's horse took over the photo shoot with an ear-to-ear grin that has won Facebook over. (iStock)

Pennsylvania bride Patty Womer was posing for photos on her wedding day when an unlikely guest stole the spotlight.

Womer was taking photos with her dear horses Dutch, a sorrel gelding, and Cricket, a paint mare, when Cricket started smiling for the camera.

Now the cocked-head, wide-mouthed grin has gone viral on Facebook after the photographer, Tony Bendele, posted them to his Facebook.

“I honestly don’t mind having attention on her instead of me. Dutch and Cricket are such a big part of me, and I will always have a special place in my heart for them,” Womer tells Yahoo Lifestyle.

The two horses were a present from her father when she was 8 years old. Her close bond to the two animals and their connection to her father – who passed away in 2016 – prompted her to include them in her wedding. The two escorted Womer up to the ceremony. Dutch, her father’s horse, walked beside Cricket with an empty saddle.

“This just showed that my father was there with me through the whole thing,” Womer, an agriculture science major at Penn State University, said to Yahoo.

Bendele, who has photographed wildlife before, told Yahoo that he’s “never seen a horse doing the smile like that.”

“It actually caught my eye initially when we first started doing the photographs. As the bride was smiling the horse would look up and put its teeth just like that,” he said.

Womer concedes that Cricket isn’t exactly smiling for the cameras.

“Honestly, the horse is just shaking her head trying to get a fly off or something but with her showing her teeth, it looks like she is smiling,” she said.

But people on Facebook have still been enjoying the pictures and many have commented saying they would like to incorporate their own animals into their ceremonies.

To that, Bendele encourages people to make sure they know how their animals will react to large groups and loud sounds.

“We had an experience back in 2016 where we had a bride come down in a carriage and they were going to walk it down the aisle,” he recalls. “As soon as one of the horses got close to the people, somebody had their back turned to it and then turned around and scared it, so it took off and actually flipped the carriage.”

Fortunately, the bride was not hurt in the impromptu race.