For some people, feelings matter more than traditions.

A wedding guest shared a story on Reddit about a bride who burst into tears of anger when she saw her husband dancing with his mom at their wedding.

Once people found out why, however, not everyone was ready to call her a bridezilla. 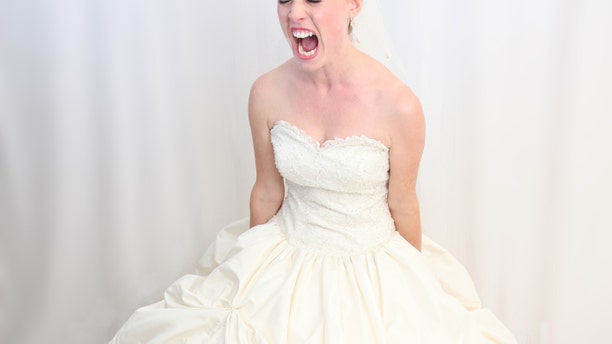 When the bride saw her husband dancing with his mother-in-law during the ceremony, she ran out and was seen crying, ranting and raving. (iStock)

A Reddit user posted the story under the name Ymirshiddentalent on the site’s Bridezillas forums. After explaining that the bride's father died when she was young, he explained how this affected the wedding planning.

“She didn’t want anyone else to walk her down the aisle and walked alone, which in my personal opinion, is understandable considering the circumstance, albeit unusual,” he wrote. “However, there was a stipulation that her future mother-in-law and her fiancé were not allowed, under any circumstances, to have the formal ‘mother-son dance’ because she couldn’t have a ‘daddy-daughter dance.’ When she informed her fiancé and future mother-in-law, the mother-in-law was very upset, because the fiancé is her only child (!), but the bride refused to budge.”

Despite being upset, the groom’s mother agreed not to have a mother-son dance at the wedding. Unfortunately, things didn’t go according to plan.

“The night had been going on for some time and eventually a slow dance rolled around,” the story continues. “The mother-in-law and son took that opportunity to dance together and share a moment. The family of the groom, totally unaware of the bride’s unofficial rule, begin cheering as they watched them dance together, people started taking pictures, a crowd formed.”

According to the post, the bride did not react well to this. “The bride, who was already not happy when she saw the two of them begin dancing, is now FUMING,” the post continued. “She ran outside the banquet hall to the bathroom and had a huge hissy fit complete with mascara tears, swearing, ranting and raving.”

The story concludes by explaining that the couple stayed together, but the author still couldn’t believe the bride’s response.

Reddit users, however, were understanding of the bride’s wishes, even if they didn’t completely agree with them.

"That’s tough, losing a parent is hard,” wrote one user. “But I don’t agree with her actions. You want so bad for your parent to be there to dance I get it. To take it away from someone whose parents are there, just isn’t the right way to go about it. You don’t take something away because you don’t have it.”

Others were less understanding, with one response reading, “Imagine going through the remainder of your marriage being told ‘you cannot share special moments with your parents because I can’t.’”

Not everyone disagreed with the bride, however.

As one user explained, “This is actually pretty normal for women who lose their fathers early in life....I asked my spouse not to have this dance either, because I knew I would break down sobbing if he did. I was already upset my dad wouldn't be there, and my spouse knew how much he meant to me (and didn’t have strong feelings about dancing with his mother), so we skipped it. If it had been important to him, I would have probably found a way to be out of the room for it, because I wouldn't want my emotional reaction to darken their moment.”