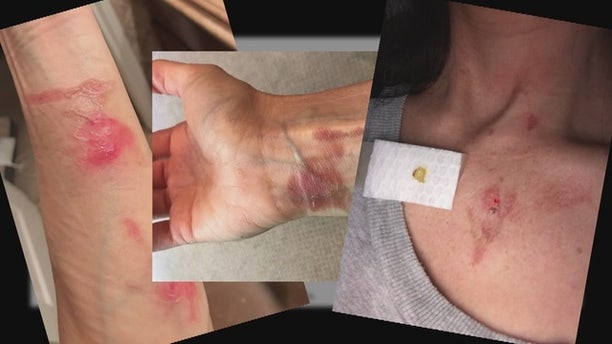 Sheryl Utal claims she sustained the above injuries while using her "NutriBullet" for 15-20 seconds. (Fox 11)

At least 14 people are suing the makers of "NutriBullet" over claims that the product burst during use, leaving them with severe lacerations and burns. The alleged victims claim the speed of the blade causes heat and pressure to build in the sealed vessel, which causes the container to burst from the rest of the machine, Fox 11 reported.

One victim, who was injured in May, said she was using the product for about 20 seconds before it burst.

“I had my hands on it, like you normally do as you put it in and turn it to lock it in place, and it was on for maybe 15 to 20 seconds and it exploded,” Sheryl Utal told Fox 11. “It spins so fast that it heats up the contents, the contents get under pressure, and the device explodes, so that hot liquid exploded onto me and created nasty burns.”

Utal’s attorney told the news outlet that the product is lacking safety features, and that he’s representing another client who required six surgeries after her hand fell into the blade.

“We represent one client whose dominant right hand was mutilated by the NutriBullet, she was making lunch for her husband, the unit, lid, vessel exploded, and it caused her hand to fall into the blade,” Doug Rochen told the news outlet.

NutriBullet has denied the allegations made against its product, with an attorney citing user error as a likely cause of injury. Mark Suzomoto told Fox 11 that the product is designed to be sealed to product the user’s hands from the blades, and that while it can heat up due to friction, it is “impossible” for such a reaction to occur after 20 seconds of use.

Suzomoto also pointed out that the product’s manual warns against using the product for over one minute due to potential heating issues.

“Any product can present a risk,” he told Fox 11. “Like driving without a seat belt. What’s alleged to have happened is physically impossible.”