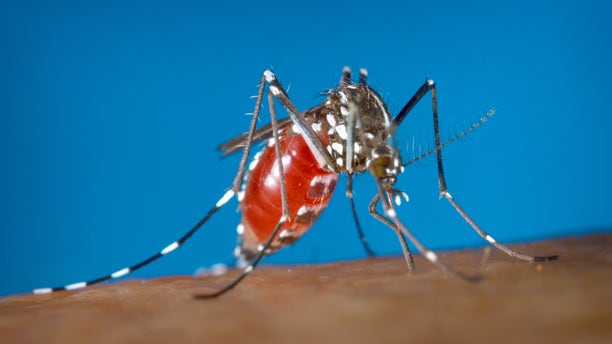 CORRECTS CDC IS INVESTIGATING WHETHER AEDES ALBOPICTUS SPREADS THE ZIKA VIRUS, NOT DEFINITIVE - This 2003 photo provided by the Centers for Disease Control and Prevention shows a female Aedes albopictus mosquito acquiring a blood meal from a human host. On Friday, Jan. 15, 2016, U.S. health officials are telling pregnant women to avoid travel to Latin America and Caribbean countries with outbreaks of a tropical illness linked to birth defects. The Zika virus is spread through mosquito bites from Aedes aegypti and the CDC is investigating whether it is also spread by Aedes albopictus. The disease causes only a mild illness in most people. But there’s been mounting evidence linking the virus to a surge of a rare birth defect in Brazil. (James Gathany/Centers for Disease Control and Prevention via AP)

Gov. Rick Scott declared a health emergency in four counties Wednesday after at least nine cases of the mosquito-borne Zika illness were detected in Florida.

Health officials believe all of the cases are from people who contracted the disease while traveling to affected countries.

"We have to ensure Florida is prepared and stays ahead of the spread of the Zika virus in our state," Scott said in a statement. "We know that we must be prepared for the worst even as we hope for the best."

Scott signed the order to cover Miami-Dade, Lee, Hillsborough and Santa Rosa counties. That's where all of the affected cases were detected.

The Zika virus is linked to brain deformities in babies and is causing concern among public health officials worldwide. The illness is primarily spread through mosquito bites, but investigators have been exploring the possibility it could be sexually transmitted.

U.S. health officials say a person in Texas became infected with Zika through sex, in the first case of the illness being transmitted within the United States.