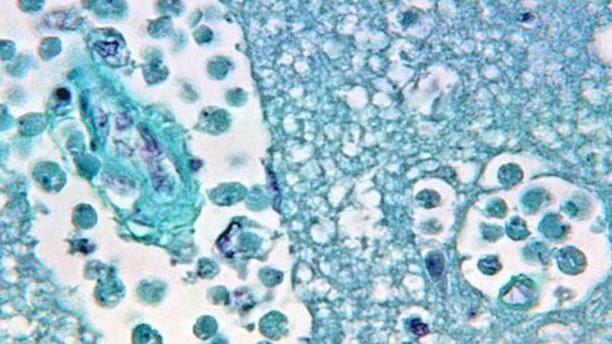 Naegleria fowleri, also referred to as the "brain-eating amoeba" or "brain-eating ameba," thrives in freshwater at warm temperatures. It can cause a rare but deadly infection of the brain called primary amebic meningoencephalitis (PAM). (Dr. George R. Healy, CDC)

A parasitic amoeba that causes deadly brain infections has turned up in a warm spring in Grand Teton National Park, prompting a warning for those seeking a soak.

Even so, Grand Teton officials announced Monday tests confirm the amoeba in Kelly Warm Spring, a popular soaking hole in the park.

She urges people in Kelly Warm Spring to avoid getting water up the nose.

The so-called "brain-eating" amoeba killed an 11-year-old girl in South Carolina on Friday.