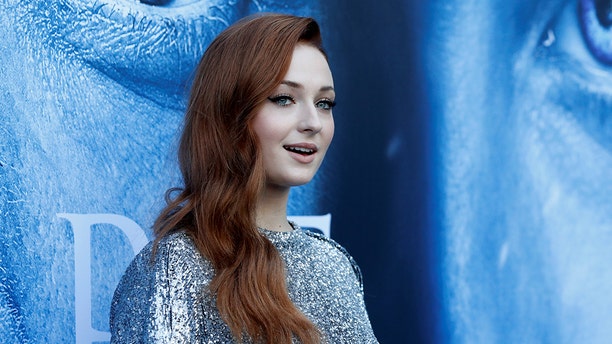 Cast member Sophie Turner poses at a premiere for season 7 of the television series "Game of Thrones" in Los Angeles, July 12, 2017. (REUTERS/Mario Anzuoni)

“Game of Thrones” star Sophie Turner got mad on Monday about the way some paparazzi are treating the cast of the hit show “Stranger Things.” Turner, who is not a affiliated with the Netflix series, took to Twitter to chastise the way the kids are being stalked by photographers.

Turner, who has been in the public eye thanks to her role as Sansa Stark since she was 15 years old, had a lot to say about adults camping outside the hotels of the cast, which consists mostly of children.

“Damn… seeing fully grown adults wait outside the ‘Stranger Things’ kids’ hotels etc, and then abuse them when they don’t stop for them… Is Super weird A. What adult in their right mind waits for a CHILD outside their hotel and B is then is offended when the CHILD doesn’t stop,” she wrote in a fiery series of tweets. “It doesn’t matter if they are an actor… they are kids first.

“Give them the space they need in order to grow without feeling like they owe Anyone anything for living their childhood dreams. Oh and ps. Imagine.. You, a parent, walking with your 13 year old son/daughter and seeing a fully grown adult pointing their camera phone.. .. at your kid. You would do anything you could to delete that persons photograph, and remove your child from that situation as soon as… .. you could. It doesn’t matter if that child happens to be an actor and consented to a professional film crew capturing their moves when.. .. in character.. That does NOT mean that this child consented to being followed around with a camera in their face.

“I don’t care if it “Comes with the job” . It doesn’t. And how dare you shun and demean that child when they don’t pose for an adult strangers photograph or walk over and talk to them when they.. .. take that NOT CONSENTED FOR photo . Doesn’t that go against everything we teach our children anyway? Pshhhh. Some people man.”

As Yahoo Entertainment notes, Turner’s comments come in the wake of a similar Twitter tirade from “Stranger Things” actress Shannon Purser, who fired back at someone who called co-star Finn Wolfhard “heartless” for not stopping for a photo.

The user’s initial comment has since been deleted, but the outlet notes it read: “Imagine being 14 and heartless that you can’t even stop for your fans who made you famous in the first place! WOW.”

“Okay, no. No actor is under any obligation to stop for anyone. Finn is an incredibly kind human. But he’s a human and he needs breaks too,” Purser, who played Barb in Season 1 of “Stranger Things” retorted, launching into her own Twitter thread about the issue.