The car that went down with the Titanic 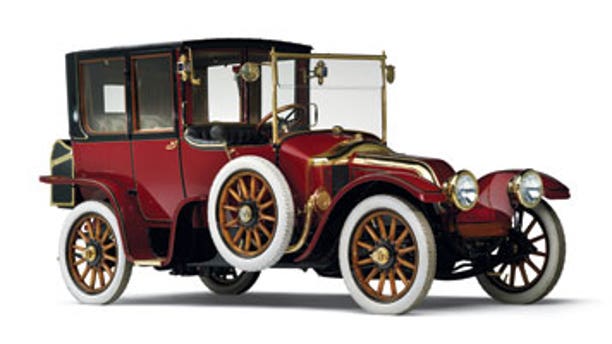 Over the years, hundreds of artifacts from the Titanic have been retrieved from the depths of the North Atlantic Ocean since the discovery of the wreck in 1985. Everything from hairbrushes to fine china and even men’s shoes offering a frozen-in-time look at the lives of those on board the ship when it went down on that fateful night in 1912.

One piece of cargo that has yet to be found, however, is also one of the most famous, thanks to a scene in James Cameron’s film "Titanic," which was recently re-released in conjunction with the 100th anniversary of the tragedy.

In it, Jack and Rose, played by Leonardo DiCaprio and Kate Winslet, consummate their burgeoning love affair in the back seat of a car that they happen upon in Titanic’s cargo hold. While it’s unlikely that anything like that actually occurred, the car itself was really on board.

The 1912 Renault Type CB Coupe de Ville, painstakingly recreated for the film, was purchased in Europe by William Carter of Bryn Mawr, Pennsylvania, who was travelling with it and his family. It’s presence on Titanic confirmed as well as it can be by an entry on the ship’s cargo manifest, as well as a $5,000 claim made on it with the Lloyd’s of London insurance company after the disaster, which Carter and his wife and two children survived.

To date, it is the only automobile known for certain to have been on the Titanic, although whether or not it is still salvageable is still a mystery. Some accounts indicate that it was being shipped in a crate held in a cargo hold located in the forward section of the ship, which rests relatively intact on the seafloor. But even if the Renault wasn’t crushed upon impact, a century of immersion in salt water would certainly have taken its toll on that which remains of it.

Given its provenance, it’s difficult to estimate exactly what the car would be worth today if it were recovered, but a near twin of the Renault that was fully restored to the same color and specifications as Carter’s was sold at an RM Auction event in 2003 for $269,500.