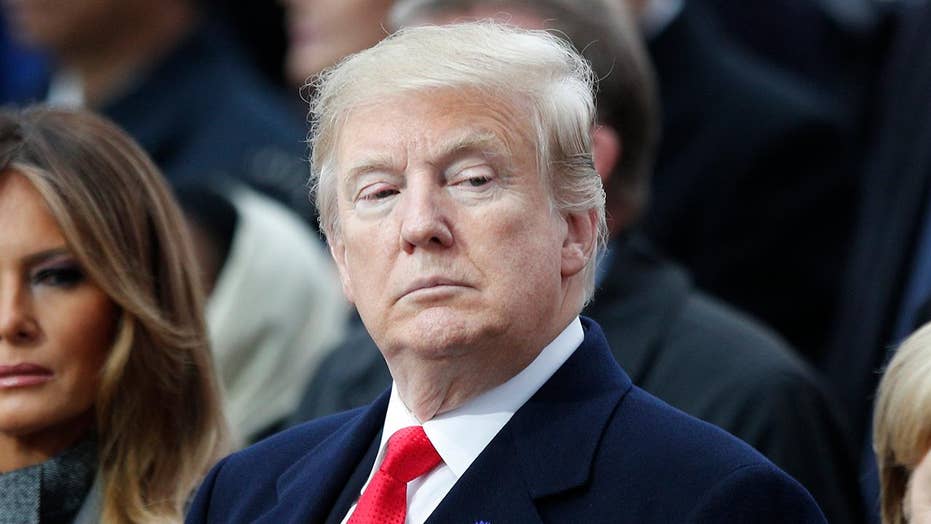 As the world marked the 100th anniversary of the end of World War I on Sunday, global leaders gathered in Paris to commemorate the solemn moment as France's president implored countries to forge alliances to preserve peace.

The ceremony for the Armistice Day centennial observance at the Tomb of the Unknown Soldier featured more than 60 heads of state and government officials gathered as French President Emmanuel Macron warned about the fragility of peace and the dangers of nationalism.

"Patriotism is the exact opposite of nationalism," Macron said. "Nationalism is a betrayal of patriotism. In saying 'Our interests first, whatever happens to the others,' you erase the most precious thing a nation can have, that which makes it live, that which causes it to be great and that which is most important: Its moral values."

Macron warned that "ancient demons" that caused World War I and millions of deaths are growing stronger, and that global leaders should "fight for peace.

French President Emmanuel Macron delivers his speech as he attends a commemoration ceremony for Armistice Day, 100 years after the end of the First World War at the Arc de Triomphe in Paris, France, Sunday, November 11, 2018. (Benoit Tessier/Pool Photo via AP)

"Let us build our hopes rather than playing our fears against each other," he said.

Macron made the comments as Trump, who has proudly declared himself a nationalist and proclaimed to be "America First," watched on.

Last week at a news conference, Trump said: "You have nationalists. You have globalists. I also love the world and I don't mind helping the world, but we have to straighten out our country first. We have a lot of problems."

The president plans to visit the American cemetery at Suresnes on the outskirts of Paris on Sunday afternoon and make remarks before heading home.

The commemorations on Sunday started late, overshooting the centenary of the exact moment when, 100 years earlier at 11 a.m., the eerie silence of peace replaced the thunder of guns in Western France.

WORLD WAR I CENTENNIAL: US AUTHOR HONORS GRANDFATHER BY RETURNING KEY TAKEN FROM FRANCE 100 YEARS AGO

As bells marking the armistice hour started ringing out across Paris and in many nations hit by the four years of slaughter, Macron and other leaders were still on their way to the centennial site at the Arc de Triomphe, according to the Associated Press.

Among the line of world leaders, Russian President Vladimir Putin and German Chancellor Angela Merkel were positioned between Trump and Macron. The geographical spread of the leaders in attendance showed how the "war to end all wars" left few corners of the earth untouched but which, little more than two decades later, was followed so quickly and catastrophically by the even deadlier World War II.

In the four years of fighting, remembered for brutal trench warfare and the first use of gas, France, the British empire, Russia and the United States had the main armies opposing a German-led coalition that also included the Austro-Hungarian and Ottoman empires. Almost 10 million soldiers died, sometimes tens of thousands on a single day.

The United States came late to the war, in April 1917, but over 1½ years it became a key player in the conflict and tipped the scales for the Allies. When the war ended on Nov. 11, 1918, the U.S. armed forces were on the cusp of becoming the major military power in the world.

Even though Germany was at the heart of provoking two world wars over the past century, the nation has become a beacon of European and international cooperation since.

On Sunday, Merkel met with the head of the United Nations, born from the ashes of World War II, and the president of Serbia. It was a Serb teenager, Gavrilo Princip, who assassinated the Austro-Hungarian crown prince in Sarajevo in 1914 to set off events which led to the outbreak of war.