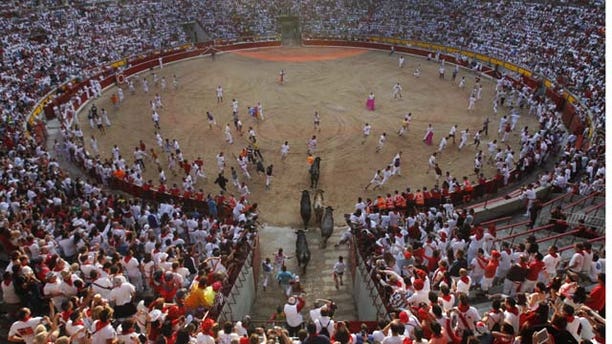 July 14, 2013: Runners arriving to the bull ring with "Miura" fighting bulls during the eighth and last running of the bulls at the San Fermin festival, in Pamplona, Spain. (AP Photo/Alvaro Barrientos)

A bull gored an Australian woman and left her seriously injured during the final bull run of this year's annual San Fermin festival in Spain on Sunday. Four other runners were hospitalized with cuts and bruises.

The 23-year-old woman, identified only as J.E., was gored in the back and suffered multiple rib fractures and damage to her right lung that left her in "very grave" condition after an operation at Navarra Hospital, said the regional government that organizes the festival.

The Australian was struck by a massive Miura bull as she clung to wooden barriers outside the bullring entrance, said regional health authority spokesman Javier Sesma.

It is very rare for women to be gored during the annual festival since most of the runners are men. Javier Solano, a San Fermin expert working for national broadcaster TVE, said records showed only two other women had been injured by gorings in the recent history of the fiesta.

The four injured runners who were tossed by bulls or fell as they ran were identified as a 39-year-old man from California, a 23-year-old man from Madrid and two men from Navarra, said the regional government organizers. None of those injuries were serious.

Dramatic confrontations between runners and bulls had occurred during the previous two days of the festival.

A 19-year-old Spaniard who had stopped breathing after being crushed by large pileup of fallen runners on Saturday has recovered consciousness and begun to breathe without mechanical assistance, Sesma said Sunday.

A 35-year-old American man from Cleveland, Ohio, who was gored by a bull Saturday was recovering "favorably" from a "rectal perforation" that affected his abdomen and a kidney, said a Navarra Hospital statement.

Patrick Eccles, a 20-year-old University of Utah student who was gored Friday, was in a stable condition and improving after having had his spleen removed, the statement said.

Miura bulls, which can weigh 1,530 pounds, are renowned as Spain's largest and fastest fighting bulls, and Sunday's bull run was quick, taking 2 minutes, 16 seconds to cover 928 yards from stables just outside Pamplona's medieval stone wall to the central bullring.

Despite the animals' size and strength, experts admire Miuras for their explosive acceleration, stamina and grace, characteristics that inspired legendary Italian car maker, the late Ferruccio Lamborghini, to name one of his iconic sports cars after the breed.

The San Fermin festival, which honors the patron saint of this northern city, dates back to the late 16th century and is also known for its all-night street parties, where copious quantities of red wine from Navarra and Rioja are consumed and sprinkled around.

The festivities were made famous by Ernest Hemingway's 1926 novel "The Sun Also Rises."