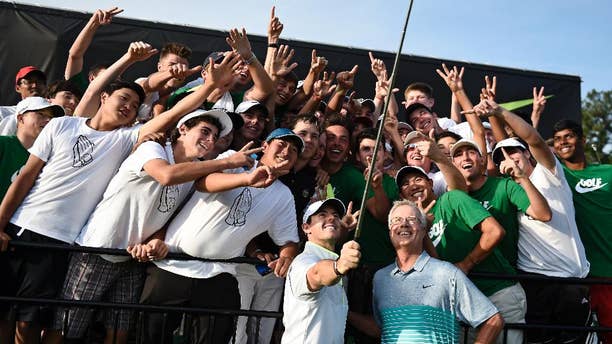 Rory McIlroy uses a selfie stick to take a photo with many of the 54 golfers at the Junior Invitational golf tournament, after speaking to them following the second round at Sage Valley Golf Club in Graniteville, S.C., on Friday, April 24, 2015. (Jon-Michael-Sullivan/The Augusta Chronicle via AP) (The Associated Press)

Tennis fans going to Wimbledon this year can leave their selfie sticks at home.

The Grand Slam tennis tournament has become the latest sports event to ban the use of the devices, with organizers calling them a "nuisance."

The All England Club says the decision was made so that selfie sticks don't "interfere with spectators' enjoyment" during the June 29-July 12 championships.

Selfie sticks are common sights at sports and music venues around the world, as fans use the pole-like device to grasp smartphones and snap self-portraits.

Churchill Downs, which stages the Kentucky Derby, announced this month that selfie sticks were banned for the May 2 race.

A Wimbledon ticketholders' guide says "in common with many other major sports and entertainment events and cultural attractions, The Championships will not allow selfie sticks into the grounds."