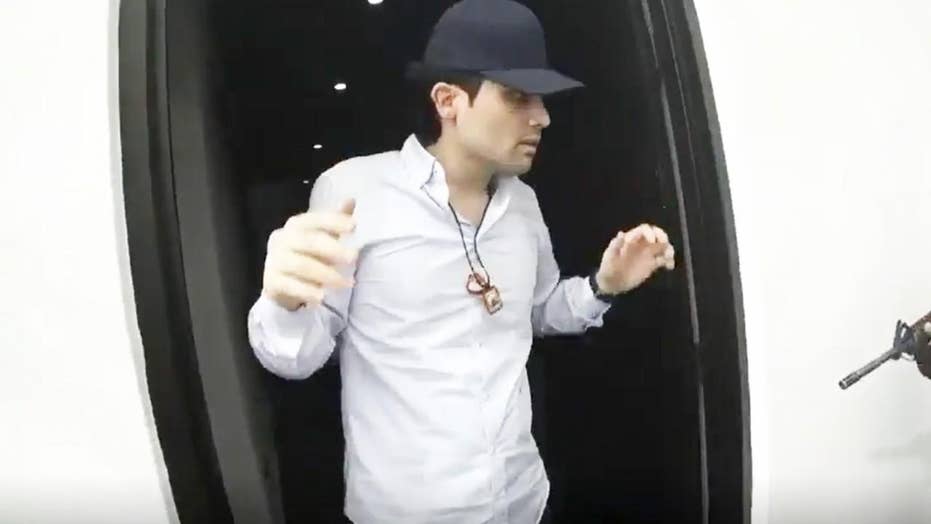 Authorities in Mexico on Wednesday showed dramatic helmet cam footage of the moment Joaquin “El Chapo” Guzmán's son was captured by police earlier this month, before the government released him after an ambush by cartel gunmen killed at least eight people.

Ovidio Guzman Lopez was arrested Oct. 17 in Culiacan, the capital of Mexico's Sinaloa state. He is wanted by U.S. authorities on drug trafficking charges.

Cartel gunmen later ambushed a police convoy and burned road barricades in the area while Lopez was in custody.

The video footage was shown Wednesday at a press conference with Mexican President Andres Manuel Lopez Obrador and Security Minister Alfonso Durazo. Police are seen moving into a building where a young woman first emerges followed by Lopez, who is wearing a baseball hat.

Separate footage of Mexican soldiers who came under fire was also shown during the press conference.

“What could have become a scene of war and the shedding of innocent blood was resolved in favor of a return to peace and protecting the population,” Durazo said at the press event, per Reuters.

Sinaloa is home to the cartel by the same name. The notorious organization was led by El Chapo, who was sentenced to life in prison in July.

Fox News' Lucia I. Suarez Sang and Robert Gearty contributed to this report.