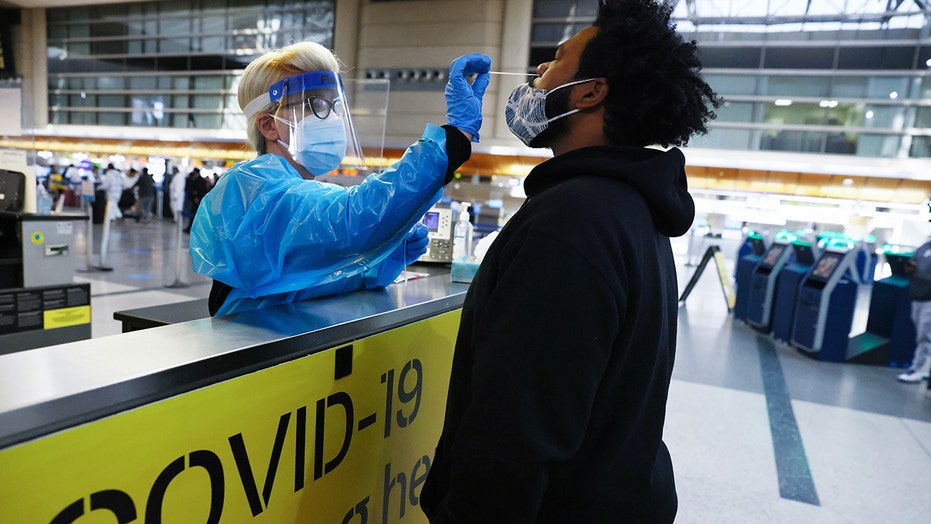 'The Next Revolution' host breaks down the evidence linking COVID-19 to U.S. funded gain-of-function research in Wuhan.

On Feb. 4, 2020, the World Health Organization warned against banning travel to and from China as COVID-19 cases surged past 20,000.

"We reiterate our call to all countries not to impose restrictions inconsistent with the International Health Regulations. Such restrictions can have the effect of increasing fear and stigma, with little public health benefit," WHO Director-General Tedros Adhanom Ghebreyesus said in a Jan. 4, 2020, executive board session.

At the time, 22 countries had reported implementing travel restrictions to WHO, Tedros added.

"Where such measures have been implemented, we urge that they are short in duration, proportionate to the public health risks, and are reconsidered regularly as the situation evolves," he said.

Then, on Feb. 27, 2020, WHO said that China's Hubei province, where COVID-19 cases first began to rapidly spread, was already reporting a "significant decrease in cases." Two days later, the Organization acknowledged that cases were rising in other parts of the world and updated its recommendations for international travel but continued "to advise against the application of travel or trade restrictions to countries experiencing COVID-19 outbreaks."

"Travel measures that significantly interfere with international traffic may only be justified at the beginning of an outbreak, as they may allow countries to gain time, even if only a few days, to rapidly implement effective preparedness measures," WHO said.

WHO's general recommendations for international travelers at the time were: wash or sanitize hands frequently, cover one's nose or mouth with one's elbow when coughing or sneezing, refrain from touching one's face, self-monitor symptoms for 14 days after traveling and wear a mask only if desired.

"A medical mask is not required if exhibiting no symptoms, as there is no evidence that wearing a mask – of any type – protects non-sick persons," WHO wrote -- guidance that has since been altered, as masks are now mandatory in public areas in the United States and other countries around the world.

In WHO's latest guidance updated on Dec. 1, 2020, the organization says "masks are a key measure to suppress transmission and save lives."

"Masks should be used as part of a comprehensive ‘Do it all!’ approach including physical distancing, avoiding crowded, closed and close-contact settings, good ventilation, cleaning hands, covering sneezes and coughs, and more," WHO said in its updated guidance. "Depending on the type, masks can be used for either protection of healthy persons or to prevent onward transmission."

On July 30, WHO provided guidance for countries planning to reopen travel after imposing restrictions for several months.

"The gradual lifting of travel measures (or temporary restrictions) should be based on a thorough risk assessment, taking into account country context, the local epidemiology and transmission patterns, the national health and social measures to control the outbreak, and the capacities of health systems in both departure and destination countries, including at points of entry," the Organization wrote.

Additionally, WHO did not designate the novel coronavirus as a "public health emergency of international concern" until Jan. 30, though it tweeted about a "cluster of pneumonia cases" in Wuhan on Jan. 4

Security personnel gather near the entrance of the Wuhan Institute of Virology during a visit by the World Health Organization team in Wuhan in China's Hubei province on Wednesday, Feb. 3, 2021. (AP Photo/Ng Han Guan)

Chinese President Xi Jinping waited until Jan. 20 to publicly acknowledge the virus, despite the fact that hospitalizations were occurring as early as Jan. 4.

The timeline of initial COVID-19 reporting became even more blurred later on.

The U.N.-backed global health body came under scrutiny in July for changing its timeline of COVID-19 events after disclosing that it initially heard about the virus outbreak from the Internet in late December of 2019, not from Beijing officials in January 2020, as it had long insisted.

According to multiple reports, the revisions were made on the WHO website on June 29, adding fuel to the fire that the Chinese leadership long purported to cover up the new virus and that WHO assisted them in doing so.

The revised text said that on Dec. 31, 2019, "WHO's Country Office in the People's Republic of China picked up a media statement by the Wuhan Municipal Health Commission from their website on cases of 'viral pneumonia' in Wuhan, People's Republic of China" but added that "the WHO's open-source intelligence platform also picked up a Chinese-language news report from Finance Sina, a Chinese outlet, about the same cluster of cases in Wuhan, attributed to a 'pneumonia of unknown cause.'"

WHO previously said its first knowledge of the coronavirus stemmed from an alert issued by the Wuhan municipal health commission, the AFP noted. However, the timeline modification now clarifies that the first notification came from WHO's Beijing office rather than from Beijing authorities.

The organization is still investigating the origins of COVID-19. WHO researchers on Wednesday visited a research center in Wuhan that some reports have suggested may be connected to the first cases of the virus.